The lights haven't improved sufficiently as the umpires call it stumps on Day 1.

India's top order struggled on a green wicket in overcast conditions to be reduced to 17 for three in 11.5 overs at stumps on the rain-hit opening dday.

Suranga Lakmal produced a superb spell with the new ball, claiming three wickets in six runs without conceding a run in his six overs.

Cheteshwar Pujara was battling hard on eight from 43 balls at stumps, while Ajinkya Rahane was yet to open his account.

KL Rahul was dismissed off the first ball of the match as he was caught behind for a duck, while his opening partner Shikhar Dhawan was bowled off an inside edge for eight.

The biggest blow for India was the dismissal for captain Virat Kohli for a duck as he was dismissed leg before wicket.

There is forecast of more rain in the next day or two in Kolkata and we could be set for more frustrating weather in the coming days.

Gamage bowls a beauty to Pujara as the ball shapes in initially before it bounces and moves away to beat the right-hander comfortably.

And immediately Pujara complains about the bad light and the umpire accepts their request.

Pujara (8) and Rahane (0) waste no time in walking back to the dressing room while Sri Lanka's players are not convinced before they slowly going back.

India reeling on 17 for three in 11.5 overs with Lakmal claiming all three wickets to fall without conceding a run in his six overs. 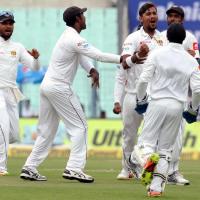 Kohli manages to see off the remaining four deliveries from Lakmal after the resumption as the Sri Lankan pacer bowls his fourth maiden over on the trot.

Gamage from the other end as Pujara leaves the first three balls before he is beaten by one outside the off-stump.

Lakmal picks up another wicket, and this time it is the prized scalp of captain Virat Kohli. The incoming delivery beats Kohli's defensive poke as he opts to take the DRS immediately but the ball is clipping the leg stump and the umpire's call stays.

Kohli makes his way back for a duck as India are reduced to 17 for three.

In the same over, new Ajinkya Rahane survives a confident shout for LBW as he is also beaten by the incoming delivery with the Sri Lankans deciding against taking the DRS.

Splendid bowling from Lakmal, he has picked up the first three wickets and is yet to concede a run so far in this game in six overs.

Meanwhile, the umpires have decided to take the tea break with the covers having been taken off completely.

The match should get underway soon in the post-tea session provided there is no further rain.

Pujara plays a nervy poke outside the off-stump but he confidently punches the next ball down the ground past mid-off for a four.

The next ball beats Pujara all ends up as the right-hander plays inside the line trying to defend but misses it.

So, we will have another halt in play as it has gone completely dark at the Eden Gardens forcing the umpires to call the players off the middle.

India are 17 for two in 8.2 overs as Pujara (8) and Kohli (0) make their way back along with the Sri Lankan players, who were keen to carry on. 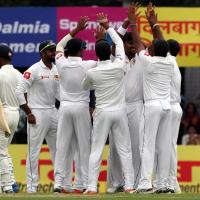 Dhawan picks another single on the leg side before Pujara finally gets off the mark with a streak boundary after facing 22 balls.

He plays away from his body to get a thick outside edge but it bounces well short and goes past the slips for a four.

Lakmal strikes again in his next over. Dhawan goes for an expansive drive through the off-side but gets an inside edge which crashes back on to his stumps.

Dhawan is bowled for eight to leave India in early trouble on 13 for two.

New batsman Virat Kohli is lucky to survive first ball as he is beaten outside the off-stump by a full outswinger, which narrowly misses the edge.

Four slips and two gullies for Kohli as Sri Lanka continue to attack with the new ball but he manages to see off the over.

Lakmal is yet to concede a run in his first four overs, while dismissing both the Indian openers. Superb stuff from the Sri Lankan pacer.

Lahiru Gamage to bowl the second over. The first ball is on the stumps as Dhawan taps it on the leg side for a single to get India off the mark.

The next five balls are outside the off-stump and Pujara is happy to see them go through to the wicketkeeper.

Dhawan gets off strike again courtesy of a leg bye off Lakmal. Pujara is happy to leave as much as possible as he safely plays out the over.

In the next over, Gamage bowls another poor delivery as Dhawan flicks him square off his pads for two runs. He defends the next few balls before crashing the last ball through the covers for the first boundary of the innings.

Lakmal nearly accounts for Pujara as he drives the right-hander forward with a full delivery and swings away past the edge of the bat. Pujara realises his mistake as he let the next few balls outside the off-stump go through. 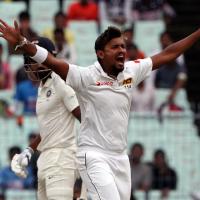 The game finally starts but India have a nightmarish start as KL Rahul is caught behind off the very first ball of the match off pacer Suranga Lakmal.

Lakmal got one to bounce and move away enough to take the edge of the bat as Rahul falls for a golden duck. That was virtually unplayable and Rahul is unlucky to get one so early in his innings.

Lakmal enjoying the conditions as he cuts Cheteshwar Pujara into half with a sharp incoming delivery which goes over the stumps.

The next bounces more than expected as Pujara somehow keeps it out. 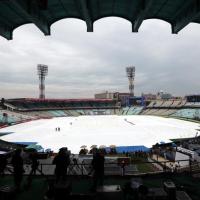 13:38   Rain plays spoilsport after Sri Lanka elect to bowl
Just as the match was about to begin the rain has played spoilsport yet again.

The two openers -- KL Rahul and Shikhar Dhawan -- were out in the middle along with the Sri Lankan players before the umpires forced the players off the middle.

The whole of morning session was lost because of rain and a wet outfield before the toss took place at 1pm.

There is forecast of more rain in the next day or two in Kolkata, as per reports.

Read more >
13:07   Sri Lanka elect to bowl; India include 3 pacers
Sri Lanka captain Dinesh Chandimal has won the toss and has no hesitation in electing to bowl.

"There is some moisture and a green covering on the pitch," says Chandimal about his decision.

Even India captain Virat Kohli reckoned he would have bowled first considering the green pitch and overhead conditions.

"The first two days will be challenging to bat," he says.

Kohli says they are going in with five batsmen and two all-rounders in Ravichandran Ashwin and Ravindra Jadeja.

KL Rahul, who hit fifties in his last seven Tests innings, is preferred as the opener ahead of Murali Vijay.

"The ball is going to do a lot, there is not much between the outfield and the pitch," says Gavaskar.

"The pace bowlers will get more help than the spinners and the batsmen will not have it easy. The opening bowlers will have a field day on this pitch," he adds.

12:57   Toss at 1pm IST after rain delays start
Finally, some good news from the Eden Gardens as the BCCI that the toss will place at 1pm IST.

The match will start at 130pm IST. 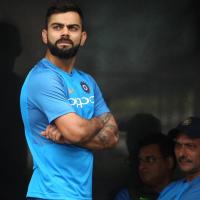 The groundstaff are still working on getting the ground ready for play as the umpires decide to conduct another inspection at 1245 IST.

"Most of the covers are off and the ground staff working in full flow. Next inspection at 12.45 IST #INDvSL," BCCI tweeted.

Read more >
11:43   Rain delays start in Kolkata, inspection at 1210 IST
The rain has stopped and the groundstaff are working to dry the outfield.

The umpires have announced lunch has been taken and they will conduct an inspection at 1210 IST.
Read more > 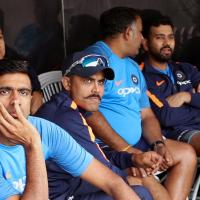 11:10   Rain delays start of India vs SL first Test in Kolkata
The covers are coming off and the super soppers are busy at work, removing the water from the covers near the boundary.

Meanwhile, both teams, who waited patiently for an hour or two, have gone back to the hotel which means the game is not expected to start anytime soon.

The weather forecast is not encouraging as far as the match is concerned. PTI reports that there is more forecast of rain for next 24 hours because of a deep depression in the Bay of Bengal.

But it's still quite dark overhead and it could be a while before we can get started!
Read more > 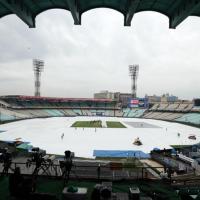 09:09   Rain delays start of India vs SL first Test in Kolkata
It has started to rain in Kolkata and the groundstaff, who were in the process of taking off the covers, are rushing them back on.

Looks like we are set for a long delay. 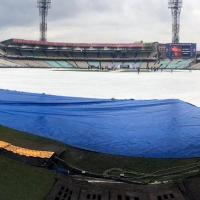 08:47   Updates: Rain set to delay India vs SL first Test in Kolkata
Welcome to the coverage of the first Test between India and Sri Lanka in Kolkata on Thursday.

Not so good news from Eden Gardens as the start of the match is set to be delayed. The ground is under covers and the weather overhead is not too encouraging with dark clouds hovering above.

"A waiting game today #INDvSL" BCCI tweeted along with a picture of a fully covered outfield.

Meanwhile, you can check out some special features on Rediff.com.