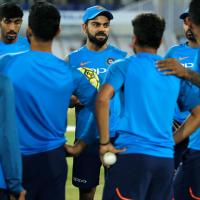 20:26   India vs Australia 3rd T20I called off due to wet outfield
The umpires have decided to call off the third and final T20 International between India and Australia because of a wet outfield.

The three-match series will finish 1-1, leaving a huge gathering at the Rajiv Gandhi International stadium in Uppal, Hyderabad disappointed as they return home empty-handed, having waited patiently for nearly two hours.

India won the rain-hit opening match in Ranchi by nine wickets via the Duckworth-Lewis method. Australia made a superb comeback in the next game as they thrashed India by eight wickets in Guwahati.

The next series for India will be the limited overs series against New Zealand, with the opening ODI to be played in Mumbai on October 22. 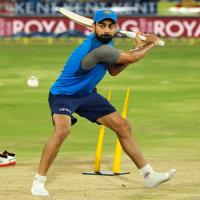 20:01   Wet outfield delays start of India-Aus series decider
The covers have been brought back out to the middle delaying the inspection scheduled at 745pm IST.

There is no rain but the groundstaff have brought on the covers.

Meanwhile, the Indian players are having some fun in their warm-up sessions with Virat Kohli, Rohit Sharma, Mahendra Singh Dhoni and others practicing some left-handed batting.
Read more >
19:19   Wet outfield delays start, next inspection at 745pm
The umpires have decided that the conditions are still not good to get the game underway and will wait for another half an hour before conducting another inspection.

After discussions with the two captains, the umpires have announced that they will conduct another inspection at 745pm IST.

Meanwhile, India's players are having some fun in the warm-up sessions. Captain Kohli just played a couple of powerful slog sweeps batting left-handed!
Read more >
19:17
The two captains -- Virat Kohli and David Warner -- are having a chat with match referee Richie Richardson and the umpires, who are briefing the two skippers on the conditions.

19:09   Wet outfield delays start of India-Aus series decider
The umpires are conducting an inspection of the conditions but things don't look good at the moment with parts of the outfield still very wet and soggy.

We look set for a long delay here!

Let's wait and watch what the umpires report after their inspection...

Read more >
18:15   Wet outfield delays start, inspection at 7pm
The start of the series-deciding third and final T20I has been delayed because of a wet outfield.

"The toss has been delayed at the Rajiv Gandhi International Cricket Stadium. Next inspection at 7 PM IST," BCCI tweeted.
Read more > 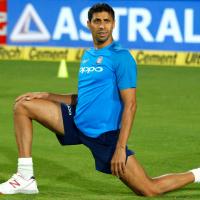 18:10   Will Nehra replace Kuldeep?
"The wicket is hard, there will be good carry for the fast bowlers and the batsman will enjoy playing their shots."

"Ashish Nehra must play in place of Kuldeep Yadav," says VVS Laxman expecting the pitch to assist the fast bowlers more than the spinners.

With rain predicted to impact the match later in the evening, Laxman wants the team winning the toss to field first and chase the target.

Veteran Indian pacer Ashish Nehra has decided to call time on his injury-ravaged career after next month's opening T20 International against New Zealand at his home ground in Delhi later this month.
Read more > 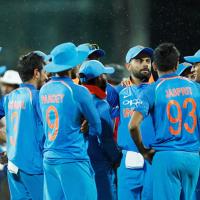 17:17   India aiming to bounce back in series decider
Welcome to the coverage of the third and final T20 International between India and Australia in Hyderabad on Friday.

India will be itching to avenge the thrashing they got in Guwahati when they take on an edgy but resilient Australia in the series-deciding match.

The hosts, who dominated the Aussies in the preceding One-Day International series, won the opening T20 comfortably before being soundly beaten in the second game.

With the thumping eight-wicket in the second T20I on Tuesday, Australia go into series-decider with some serious momentum.

India had a forgettable day at the Baraspara Stadium, in Guwahati, in all departments after losing the toss.

Their highly-rated batsmen were found wanting against the swinging ball as rookie Australia pacer Jason Behrendorff did most of the damage.

Captain Kohli was out for a rare duck and he, along with the rest of the batting line-up, must be eager to make amends.

India's new ball bowlers did alright in Guwahati but wrist spinners Yuzvendra Chahal and Kuldeep Yadav were taken to the cleaners by Moises Henriques and Travis Head, who shared a match-winning partnership of 109 runs.

Yadav bowled either too short or too full and the set batsmen did not have any difficulty in punishing the loose deliveries.

However, dew proved to be a factor as the ball did not turn much in the Australian innings.

Despite the hammering the spinners received, it is unlikely that Kohli will make a change and bring in Axar Patel.

Similar is the case in the pace department, which means veteran Ashish Nehra, who is set to announce his retirement in the next series, will sit out again.