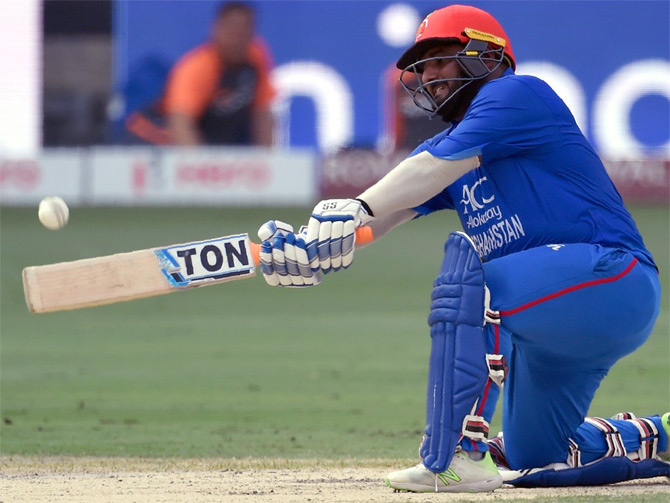 Afg 154-5 (34 ovs) vs India | Scorecard
Jadhav comes back into the attack as Afghanistan get three runs from the spinner's third over.
Chahar continues to suffer as Shahzad swings the pacer powerfully over midwicket for a six.
Shahzad another swing a few balls later but is foxed by the slower ball and suffers a painful blow on the body.
Mohammad Nabi will need to hold one end up and give Shahzad some support. So far, Shahzad has scored 114 out of Afghanistan's 146 for five in 32 overs. He will need more support from the other end if they are to cross the 200-run mark.
Jadhav bowls another tidy over, giving away just two singles in his fourth over.
Siddharth Kaul comes back into the attack. He starts with a slower ball which he loses control of to give away a wide. Shahzad hits the next ball through the off-side for a single and Nabi pulls a short ball to deep midwicket for another run.
In the next over, Nabi sweeps Jadhav for a four to take Afghanistan past 150, in the 34th over.
« Back to LIVE