Test cricket is always the top priority for any cricketer: Raina 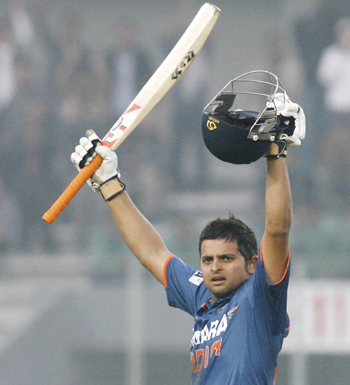 Test cricket is the ultimate pinnacle for any cricketer and therefore Suresh Raina's delight is not surprising at having being named in the Indian squad.

Though he may not get a chance to feature in the playing eleven, the mere thought that the selectors consider you next in line is something Raina feels special about.

He was earlier named in the Test squad against England in March 2006 but never got a chance to show his potential and later on was even dropped from the ODI squad.

However, he made a smashing comeback to the Indian ODI team during the Asia Cup in 2008 after which he has consistently dished out with the bat.

With Rahul Dravid and Yuvraj Singh missing out due to injuries, the selectors were forced to include the talented 23-year-old left-hander for the Kolkata Test.

In an exclusive conversation with Chief Correspondent Harish Kotian, UP batsman Suresh Raina on the importance of Test cricket for him and why just being in the squad is a learning experience for him.

How delighted are you to make it to the Test side?

It is a dream come true to be selected in the Test squad.

After playing in so many One-Day Internationals I was keen on playing Test cricket as well and I was looking forward to it. It also gives me a chance to work with top players like Sachin Tendulkar, Virender Sehwag, Rahul Dravid, VVS Laxman and MS Dhoni.

The main test for any player's ability is to succeed in Test cricket and that is why I am hoping to get a chance do well.

Were you expecting this call up since you have been quite consistent in the ODIs for India in the recent past?

I knew I had to keep performing consistently in ODIs if I ever wanted to make it to the Test side.

I have been batting quite well in the last few series that we have played including against Australia and Sri Lanka.

So I am very confident that if I am selected in the team for the Kolkata Test I will do a good job with the bat.

In the age of Twenty20 cricket where IPL is a big temptation for the youngsters, how high do you rank Test cricket in your list of priorities?

Test cricket is always the top priority for any cricketer.

If you look at all the greats playing today like Tendulkar, Dravid, Laxman, Sehwag and even Sourav Ganguly for that matter they have all made a name because of their top performances in Test cricket.

ODIs are also important but it is Test cricket where the fans really appreciate your good performances and remember it for a long time. So if you perform in Test cricket it gives you more satisfaction than any other formats.

It tests your abilities more than the other formats and that is why when you succeed at the Test level you know that you have done a good job as a cricketer. 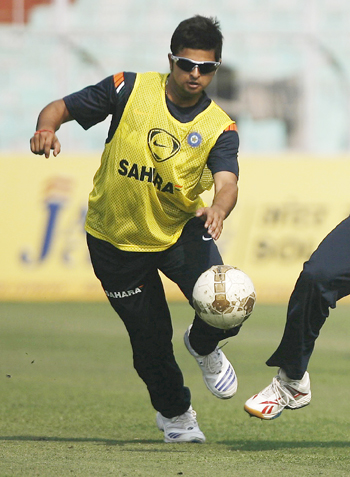 What is important for a batsman when it comes to playing against a top bowling attack like South Africa in a Test match?

This is just one bad game that we had and I am sure we will come back strong in Kolkata. If you look at our performance in the last couple of years we have done well against all teams in all conditions, so you can't judge us on just one bad game.

We had a few positives from this match in terms of our batting with Tendulkar and Sehwag scoring hundreds and if the rest of the batsmen come good too then surely South African bowlers will suffer.

It all depends on how your batting form is at the moment and how clear your thinking is when you are out in the middle. We know that fast bowling is their strength but batting has been our strength as everyone knows so it should be a good contest in Kolkata.

Short pitched bowling has been a problem area for you when you started and a few years after that. Does it still affect you and how have you addressed that particular problem?

I have played over 90 ODIs and scored over 2000 runs so you can't just say that I have had a problem.

I have worked my way through the problem by practicing hard, talking to senior players like Rahul Dravid.

Every batsman struggles against good short pitching bowling or has some other weakness in their game which they gradually tackle by working in the nets so it is not only me.

But I have worked hard and am prepared for any challenge that comes my way.

Would you still continue to bat in your own attacking style in Test cricket or restrict yourself and look to bat for a long time?

It will all depend on the circumstances and the position I am batting in. I will bat according to the situation.

I have played more than 50 matches in Ranji Trophy and I have learnt a lot on how to bat in the longer format so I should be able to adjust according to the situation.

Do you believe despite the injuries to Rahul Dravid and Yuvraj Singh, India can stage a strong comeback by winning the second Test and level the series at 1-1 like they did in 2008?

I am sure we will definitely win the second Test match. In the past also, when we have been we have comeback strongly. We just need to be patient and show the right attitude and the results will come.

We don't need to panic because we are the number team in the world and we have the potential to beat any side on our day.