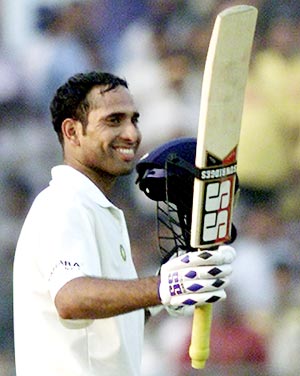 Star Indian batsman VVS Laxman struck his first County Championship century to put Lancashire in the box seat against Yorkshire on day three of the Division One match in Manchester.

After bundling out Yorkshire for 181 in the first essay, Lancashire rode on centuries from Mal Loye (146) and Laxman (109) to reach 489 for five before declaring their innings, on Sunday.

At the end of third day's play, Yorkshire were 71 for two and Laxman took a catch in the slip to return Joe Sayers.

After openers Paul Horton (84) and Tom Smith (40) had given Lancashire the perfect start, Laxman and Loye built on the foundation and went on to put together a 225-run third wicket stand as their side tightened the grip over Yorkshire.

After Loye fell to Adil Rashid, Laxman too was dismissed by the leg-spinner but not before contributing a classy 109 off 207 balls, laced with 13 boundaries.