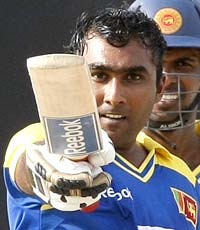 Mahela Jayawardene scored a brilliant hundred to guide Sri Lanka to a series-clinching six-wicket victory in the third one-day international against Pakistan on Monday.

The former Sri Lanka captain, who opened the innings after Sanath Jayasuriya fell sick, scored a sublime 123 as the hosts overhauled Pakistan's 288 for eight with 21 balls to spare.

Jayawardene compiled a 202-run partnership for the first wicket with Upul Tharanga, who scored 76.

Jayawardene's century, an innings that was hampered at the end by painful leg cramps, was the 11th of his career and his first since 2007.

Pakistan hopes were briefly buoyed after the fall of three quick wickets, Sri Lanka sliding from 202 without loss to 212 for three.

However, skipper Kumar Sangakkara finished off the game with an unbeaten 37, adding 56 with Thilina Kandamby (32) for the fourth-wicket.

Umar Akmal top-scored with a brisk 66 for Pakistan and his elder brother Kamran Akmal chipped in with 45, sharing a 71-run second-wicket partnership with skipper Younus Khan, who scored 44.

© Copyright 2022 Reuters Limited. All rights reserved. Republication or redistribution of Reuters content, including by framing or similar means, is expressly prohibited without the prior written consent of Reuters. Reuters shall not be liable for any errors or delays in the content, or for any actions taken in reliance thereon.
Related News: Scorecard Mahela Jayawardene, Upul Tharanga, Kumar Sangakkara, Kamran Akmal, Shahid Afridi
COMMENT
Print this article