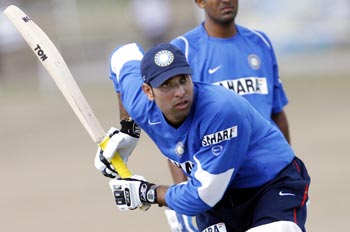 Put into bat, the hosts were reeling at 11 for two when rain interrupted play and the match was reduced to a 21-overs-a-side affair.

Northamptonshire soon slumped to 25 for five before Rob White (23) and Johan van der Wath (35 not out) put up some resistance and helped the side post 102 for seven.

Chasing 100 under Duckworth-Lewis regulations, Lancashire got off to a sound start with Tom Smith (43) and Laxman going great guns before another rain-interrupted left the visitors needing just 88 runs from 14 overs.

Monty Panesar then removed Paul Horton (1) but Laxman -- who was lucky to get two lives in his brief knock -- stood his ground as the Red Rose romped home with 13 balls to spare.

The star Indian batsman had struck his maiden county century against Yorkshire earlier this week.

Harbhajan asks journo to listen to Raja's view on Amir

Do-Or-Die For India Against New Zealand