Zaheer Khan ruled out for the year

The Indian cricket team on Friday suffered a major jolt as injured pace spearhead Zaheer Khan was ruled out of international cricket till the end of the year. He will miss four major tournaments, including the Champions Trophy.

BCCI secretary N Srinivasan announced that Zaheer, who suffered a shoulder injury while playing for Mumbai Indians in the IPL-II in South Africa earlier this year, will be able to resume cricket only by the end of this year as he underwent a surgery last month and is rehabilitating in the African nation. 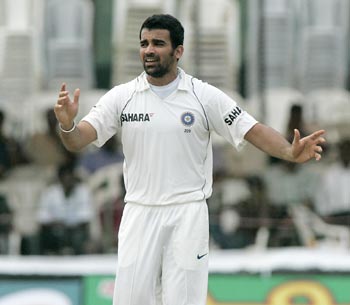 "Zaheer Khan had an arthroscopic labral repair in his left shoulder on July 13, done by the Johannesburg-based Dr Mark Ferguson," Srinivasan said in a statement.

"Zaheer is undergoing rehabilitation in South Africa and is recovering very well. He is expected to return to international cricket by the end of this year," the statement added.

Zaheer had featured in India's brief Twenty20 World Cup campaign in England before missing the four-match ODI series in the West Indies.

"Zaheer will be back to India from South Africa on August 9 for 10 days. He will then return to South Africa for further rehabilitation on his shoulder," the statement said.

Meanwhile, Virender Sehwag has also been advised to rest his shoulder till September 17.

Sehwag had sustained the injury during Delhi Daredevils' semi-final match in the IPL in South Africa following which he missed the Twenty20 World Cup and the series against the West Indies.