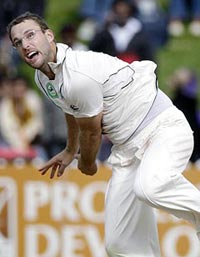 Daniel Vettori became second New Zealander (after Richard Hadlee) and 24th bowler overall to take 300 wickets in Test cricket, when he dismissed Kumar Sangakkara's on the first day of second and final Test at the Sinhalese Sports Club in Colombo on Wednesday.

More remarkably, Vettori is the first left-arm spinner to accomplish the feat.

He was already the most successful left-arm spinner in history, having surpassed Englishman Derek Underwood's tally of 297 wickets in the first Test in Galle last week.

Having already completed his 3,000 runs in Test cricket, Vettori also completed the coveted double of 3,000 runs and 300 wickets, thus joining the ranks with seven other all-rounders.

Note: Garry Sobers and Bill Johnston also took wickets bowling medium pacers. However, it is known how many of their wickets came off each style.