A belligerent start by Virender Sehwag (64) and a spectacular finish by birthday boy Yuvraj Singh (60 not out) ensured India a comfortable six-wicket win over Sri Lanka in the second T20 international at the PCA stadium, in Mohali, on Saturday.

Chasing a formidable 207 to win and square the two-match series, the home side romped home for the loss of just four wickets and with five balls to spare.

It was the highest successful run chase in the history of T20 internationals.

After Sehwag had provided a start that has become synonymous with him, Yuvraj gave flashes of his brilliance, sealing the issue with a massive six over long-on off the first ball of the final over, bowled by Angelo Matthews.

Yuvraj's 25-ball blitzkrieg comprised three hits to the fence and five huge ones over it. The five maximums helped him take his tally in T20 internationals to 35, the most by any batsman in this format.

Dinesh Karthik was unbeaten on four.

The Sri Lankans had taken a risk by not including a genuine spinner in their attack, going in with an all-seam attack instead.

But a batting wicket, aided by some sloppy fielding, meant that ploy boomeranged on them. 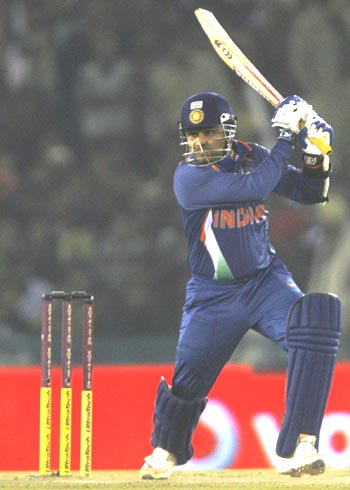 As the Indian chase began, Sehwag did what he does the best -- give India a great start.

He began by smashing the final ball of the first over of the Indian innings, by Weeraratne, for the maximum over extra cover. There was an encore of the same in the bowler's second over, this one even bigger.

Sehwag was fortunate to get a reprieve when Jayasuriya, running in from long-on, failed to latch on to a mishit from the batsman.

The former expressed gratitude by smashing Kulasekara straight down the ground.

The Sri Lankan fielders seemed to be following in the footsteps of their Indian counterparts, also missing early opportunities to run -ut both Sehwag and his opening partner Gautam Gambhir (21).

The 50-run partnership for the opening wicket came off just 31 balls.

However, Gambhir was soon dismissed, a throw from Malinga catching the batsman short of his ground.

Captain M S Dhoni came in at number three and was a beneficiary of another Lankan benevolence, Kapugedera misjudging a catch at deep square leg (off Matthews) and also helping the ball on its way to the fence.

Dhoni said thanks by smashing the next ball over the fence.

Sehwag soon reached his half-century with a single off Fernando.

He hit a six off Matthews over extra covers and followed it up with a boundary two balls later to ensure India reached the 100-run mark inside 10 overs.

Dhoni and Sehwag put on exactly 50 runs for the second wicket.

However, the Delhi dazzler, in his bid to accelerate, gave a simple catch to Kaushalya Weeraratne at long-on off Lasith Malinga.

In came birthday boy Yuvraj Singh and he soon found his rhythm, taking 19 runs in the 13th over bowled by Weeraratne.

Yuvraj began by smashing the second ball to the extra cover fence. He followed it up with a massive six towards long-off, and three balls later heaved the ball over the ground for yet another maximum.

The 50-run partnership for the third wicket between Dhoni and Yuvraj came off just 23 balls.

After 15 overs, India were 159 for two, still needing 48 runs from the remaining five overs.

But Yuvraj changed the equation in the 16th over.

Kulasekara's first ball cleared the extra cover fence, his third landed over the long-on boundary and his fourth crossed the long-off boundary, albeit after a catch was spilled by Dilshan.

Yuvraj smashed the last ball to the fence as well to ensure 23 runs had come in that over and the match was as good as over.

Dhoni, having made his highest score in T20 international (46), was cleaned up by a superb yorker from Dilhara Fernando.

Suresh Raina (9) also was dismissed cheap. But, by then, it was a lost cause for Sri Lanka.

Sangakkara, who made a match-winning 78 in the first T20 at Nagpur, followed it up with yet another fifty, his fifth in T20 internationals.

The Kings XI Punjab player used his familiarity with the surface at the PCA stadium to his advantage, hitting eight boundaries and two sixes in his 31-ball knock.

The Indian fielding continued to be a nightmare, with Ashish Nehra, Gautam Gambhir, Dinesh Karthick and Suresh Raina guilty of dropping catches that would have stemmed the Lankans' progress.

There were as many as five dropped catches. Also contributing to the Lankan total were 17 wides, among 24 extras -- a T20 record.

Earlier, the visitors began on an aggressive note, taking 10 runs off the first over by Nehra.

Jayasuriya directed the second ball of the innings, which strayed towards the leg side, past the Indian fielders and that set into motion the Lankan innings.

Nehra followed that delivery with a wide and two balls later bowled short and wide allowing Jayasuriya to cut the ball to the third man fence.

However, Ishant struck with his second ball, cleaning up Dilshan (1), to give India the opening breakthrough.

In came Sangakkara and he guided the first ball he faced through the covers for a boundary.

And that was the start of the onslaught to follow.

Sudeep Tyagi's first over, on T20 debut, cost 11 runs, Sangakkara hitting a flat six over point and following it up with a boundary between mid-off and extra cover.

The veteran was severe on Nehra, brought back to the attack in the fifth over after a vapid opening over. The Delhi left-armer's second over was even more expensive, yielding the opposition 18 runs, all from Jayasuriya's blade.

Jayasuriya hit the second ball over the mid-on for his third boundary, got another boundary over cover in the next ball, cleared point for a maximum in the next and got an inside edge in the penultimate ball that went to the fence.

Yusuf Pathan trapped Jayasuriya (31) up front to give India its second breakthrough.

Sangakkara and Jayasuriya were involved in an 81-run partnership for the second wicket.

Sangakkara continued to lead from the front before he was caught at long-on by Ashish Nehra off Yuvraj Singh.

Thereafter, only Chinthaka Jayasinghe, dropped twice in the space of three balls off Pathan, with a 28-ball 38, made any significant contribution as Sri Lanka suffered a middle order collapse in a bid to accelerate. This despite the Indian fielders helping him in every possible way.

Mahela Jayawardene (12), Chamara Kapugedera (2), Jayasinghe and Kaushalya Weeraratne (2) fell in the space of 21 balls as India made a come back into the match.

Matthews (26 not out) and Nuwan Kulasekara (10 not out) ensured the good work of Sangakkara did not go waste by guiding the side past the 200-run mark with a 39-run stand for the eighth wicket -- that came off just 22 balls.

Nehra, in his final over, went for 16 runs, with Matthews ending the Sri Lankan innings with aplomb, pulling the final ball over the fence for a maximum.

Earlier, Sri Lanka won the toss and opted to bat.

Sangakkara was fortunate with the coin on this occasion and had no hesitation in opting to bat first.

The visitors dropped Pushpakumara in favour of Weeraratne.

The hosts made as many as three changes to the side that lost the opening T20 in Nagpur.