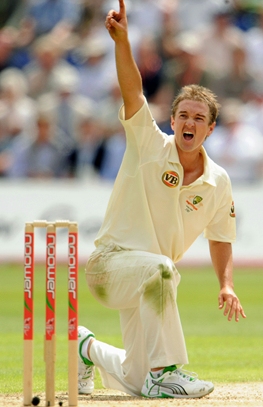 Nathan Hauritz claimed his maiden five-wicket haul as Australia beat Pakistan by 170 runs in the first Test at the MCG on Wednesday.

The off-spinner, whose previous best was four for 86, bagged two wickets in his first over after lunch to finish with 5-101, as Pakistan, chasing a world record 422 for a historic victory, crashed to 251 in their second innings.

Pakistan went into lunch at 249 for eight, and when they returned Hauritz had their captain Mohammad Yousuf caught at short leg by Simon Katich off the pad for 61 and five balls later had Saeed Ajmal (10) caught at mid-wicket by Shane Watson for 10.

Hauritz, who took four wickets on the final day, picked two wickets in as many balls in the first session, the first when Kamran Akmal (30) was stumped by Brad Haddin and the second when Mohammad Aamer (0) was cuaght by Katich.

It was a memorable match for the bowler as he scored a Test-best 75 as nightwatchman in Australia's first innings.

Mitchell Johnson put Australia on course for victory early in the morning with two wickets in the first over of the day.

The pacer had Umar Akmal (27) caught behind by a diving Haddin, the batsman failing to his overnight tally and then dismissed Misbah-ul Haq in similar fashion with the next delivery.

With 63 scalps, Johnson is the leading wicket-taker in world cricket this year. He is also the first Australian to score 500 runs and take 50 wickets in a calendar year.

The second Test commences at the SCG on January 3.