The interim selection committee, headed by former Test captain Wasim Bari, also announced the squad for the ODI series in Sri Lanka and Shoaib Akhtar did not feature there as well. 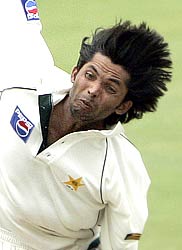 Asif is serving a 12-month ban for failing a dope test during last year's Indian Premier League; the suspension ends on the day the Champions Trophy begins.

A spokesman of the Pakistan Cricket Board insisted that the authorities had the required clearance from the International Cricket Council and the drugs inquiry tribunal of the IPL before naming Asif, whose ban ends on September 22.

Asif was last month fined by an inquiry committee, also headed by Bari, Rs one million for his 19-day detention in Dubai last year for possessing opium.

Asif has not played any cricket since last July, when the Pakistan board also clamped a blanket ban on him for the failed dope test and Dubai incident.

Meanwhile, Shoaib Akhtar's omission from both the squads should come as a shock for him, as indications were that he would be considered for the Champions Trophy despite recent fitness and disciplinary issues.

They, along with Mohammad Yousuf and Abdul Razzaq, resigned from the rebel league in late June and returned to mainstream cricket after paying a fine.

As expected, the selectors omitted leg spinner Danish Kaneria from the one-day squads and included rookie players, including batsman Umar Akmal, in both the squads.