India were subjected to a humiliating exit from the ICC World Twenty20 after a disappointing 12-run loss to South Africa at Trent Bridge, Nottingham, on Tuesday.

The defending champions put up an ordinary batting display and finished with 118 for eight in their 20 overs in reply to South Africa's 130 for five in the last Super Eights match of the tournament.

Following their fifth straight victory, South Africa remained unbeaten in the competition and will play Pakistan in the first semi-final in Nottingham, on June 18.

The second semi-final will see Sri Lanka take on the West Indies at The Oval, on June 19. The Lankans had earlier in the day beaten New Zealand by 48 runs in another Super Eight match to also finish unbeaten.

Rohit Sharma top-scored for India with 29 from 28 deliveries, while Yuvraj Singh made 25 from as many deliveries, but once again India surrendered meekly and suffered their third straight defeat.

Earlier, AB de Villiers was the only South African batsman who looked comfortable in the middle on a pitch offering considerable help to the spinners. He stroked a quick 65 from 51 deliveries, inclusive of seven boundaries, to enable the team post a decent total.

Harbhajan Singh was India's best bowler, claiming one for 20, while Ravindra Jadeja chipped in with a useful one for nine in three overs.

Captain Mahendra Singh used as many as eight bowlers, out of which five were spinners who bowled 14 overs, giving away just 75 runs for a return of three wickets.

Zaheer Khan nearly bowled a good opening over till Graeme Smith hitting the final delivery for a boundary.

Smith then survived a run-out bid. A misunderstanding with Herschelle Gibbs left him stranded but Rohit Sharma missed an easy opportunity at the striker's end. However, R P Singh struck, claiming the first wicket three deliveries later when he bowled Gibbs for 5. The South African opener tried to play one across the line through the leg side but got an inside edge and was bowled. (13-1, 1.4)

Despite that early wicket, South Africa looked to keep the tempo going. AB de Villiers appeared in vintage touch right from the start of his innings and started with a flurry of boundaries as South Africa raced to 44 for one after five overs.

But then India turned things around with the introduction of spin on a pitch that surprisingly provided a great bit of turn for the slower bowlers. In fact, captain Mahendra Singh Dhoni played around with his slower bowlers, using four of them for the next four overs.

Ravindra Jadeja was booed when he was introduced in the sixth over, but he started with a good three-run over. He was followed by Rohit Sharma (6 runs) and Yuvraj Singh (4 runs) before the pressure paid off and Harbhajan Singh started with the wicket of Smith.

The South African stepped down the wicket and tried to play a big shot on the leg side but holed out to the midwicket fielder after scoring 26 from as many deliveries. (59-2, 8.3)

No boundaries were scored for the next five overs as South Africa reached 65-2 after ten.

India continued piling on the pressure as just five runs came in three overs after the halfway stage. De Villiers had enough of the spinners getting in their overs quickly before he broke the shackles with consecutive boundaries off Yuvraj in the 14th over. It also brought up his half-century off just 41 deliveries as South Africa finally looked to force the issue.

Dhoni then introduced Suresh Raina as his fifth spinner of the innings, the eight bowler overall, and he repaid his captain's faith with a wicket immediately.

JP Duminy had struggled against the spinners, crawling to 10 from 15 deliveries, before his misery was ended by Raina, who had him stumped. (98-3, 14.4)

Jadeja then continued piling on the pressure, conceding just one run in his second over, before striking with the vital wicket of de Villiers in his third over. The batsman charged down the wicket to the left-arm spinner but could not make it to the pitch and ended up lobbing a high catch back to the bowler after a fine knock of 63 from 51 deliveries, inclusive of seven boundaries. (110-4, 17.2)

Albie Morkel got a few runs in the final over, scoring two more boundaries, as South Africa finished on 130 for five in their 20 overs.

All the spinners had a ball in the middle, on a pitch that offered good, consistent turn. Harbhajan enjoyed his time with the ball, finishing with one for 20 in his four overs. Jadeja was equally impressive, claiming one for nine in three.\

The South African batsmen looked completely lost as the spinners took control in the middle overs, giving away 44 dot deliveries, which amounts to seven overs being wasted.

India may well be feeling confident after this fine bowling display and have given themselves a good opportunity of ending their disastrous campaign on a winning note.

Gautam Gambhir started confidently, hitting a boundary through the covers in the first over of the innings by Dale Steyn. He followed that up with two more off left-armer Wayne Parnell through the off-side as India reached 17 after two overs.

Rohit Sharma took his time to settle in before flicking Parnell through the mid-wicket for his first boundary in the fourth over. India reached a comfortable 34 for no loss after five overs, but the shocking part was the South African pacers had yet to test them with short deliveries, or maybe it was something to do with the slow pitch.

Rohit then dished out some rough treatment to Morne Morkel, hitting consecutive boundaries through midwicket in the sixth over.

Gambhir seemed quite comfortable on 21 from 19 deliveries till he gave his wicket away. He gave himself room and lofted off-spinner Johan Botha straight to Duminy in the cover region. (48-1, 6.2)

Suresh Raina's poor performance in the tournament continued. He fell for 3. The left-hander tried to smash Botha on the leg-side but got a leading edge, which was taken at long-on. It ended a disappointing tournament for Raina, who made just 20 runs in four innings, with just one boundary in all the five matches. (55-2, 9)

Duminy then lured Rohit with his flight; the batsman danced down the wicket and ended up lobbing a simple catch to the backward point fielder. He was out for 28 from 29 deliveries. (56-3, 9.5)

Once again it was the spinners who did the trick, claiming all the three wickets to fall, and reduce India to 58 for three at the halfway stage.

The Indian innings was heading for disaster. After six overs, India were well-placed at 47 for no loss, but the next six saw just 17 runs being scored for the loss of three wickets, as they slipped to 64 for three after 12.

Mahendra Singh's poor run with the bat showed no signs of ending. The Indian captain scratched around for 5 from 12 deliveries before he was run-out after a misunderstanding with his deputy, Yuvraj, to compound India's problems further. (67-4, 12/5)

While as captain he was a big letdown because of his tactical blunders, he was no good with the bat either, as his return of 86 runs from five matches at 21.50 shows.

Interestingly, Harbhajan walked in at the fall of that wicket, thereby relegating Jadeja down the order, who just a few days back had walked in at number four ahead of Yuvraj.

Yuvraj brought back some cheer to the Indian fan when he pulled a short delivery from Steyn to the midwicket boundary in the 15th over. It was India's first boundary in nearly nine overs, their last being in the sixth over, and Harbhajan followed that up with a lofted cut shot over the point region.

Yuvraj spoiled van der Merwe's figures by launching him for a huge six over midwicket in his final over. It was the first six of the Indian innings and they now reached 90 for five after 16 overs, needing another 41 from the last four overs.

Harbhajan made sure India continued the momentum when he slapped Morne Morkel for a straight six to bring the equation down to 31 from the last three overs. He scored a valuable 14 from 15 deliveries before hitting a full toss from Botha straight to de Villiers at midwicket. (100-6, 17.2)

Botha had played a big role in South Africa's comeback with the ball with amazing figures of three for 16 in four overs.

Yuvraj went down fighting with a quick knock of 24 from 26 deliveries, before he was controversially given out caught behind off Steyn. The left-hander was ruled out caught by wicketkeeper Boucher after the on-field umpires consulted the third umpire. (106-7, 18.2)

Harish Kotian in Nottingham
SHARE THIS STORYCOMMENT
Print this article 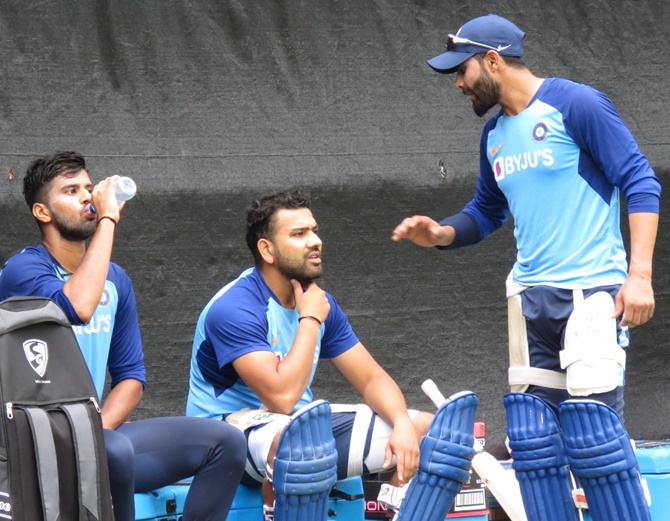 Corner seat is reserved for Dhoni, we miss him: Chahal

Sri Lanka cruise in to semis