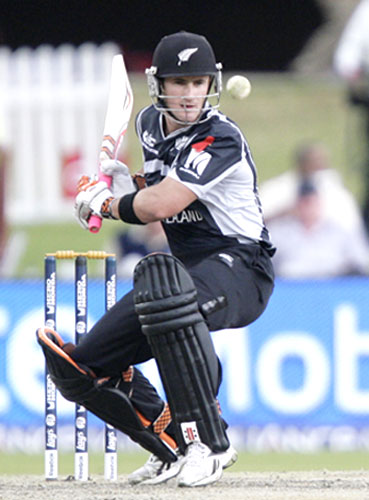 Drunk and eager to do some charity, New Zealand cricketers Neil Broom and Aaron Redmond ended up causing a "riot" during a tour of India with their 'A' team in August for which, they were even detained by the Chennai police.

According to media reports, Broom and Redmond, who were in Chennai with the Kiwi A side for the Buchi Babu tournament at that time, broke the team curfew and went out for a drink ahead of a match.

After that, the duo took out some money from an ATM and started distributing it among passersby but the crowd grew bigger then what they had expected and a "full-scale riot broke out", needing police intervention, newspapers reported.

The duo was then taken to the local police station and after some questioning by the officers to ascertain their identity, Broom and Redmond were sent back to the hotel.

Both the players owned up to the incident, saying that they didn't want any other member of the squad to be seen as a suspect by the fans or media. The Kiwi squad for that trip included stars like Shane Bond and Kyle Mills.

"Unfortunately when we decided to leave the night spot we were picked up by police following another poor decision to hand out money to people living on the street, whereupon a crowd developed," Redmond was quoted as saying by New Zealand Press Association.

"We also wish to apologise to other stakeholders in the game including the fans for our inappropriate behaviour while on tour," Redmond said.

NZC CEO Justin Vaughan downplayed the incident and said it was a closed chapter now, refusing to divulge if the players had been punished. "The incident was dealt with thoroughly and appropriately at the time," he said.

"It was a confidential process, and New Zealand Cricket considers the matter closed," he added.

New Zealand Cricket Players Association executive manager Heath Mills said though the players broke team rules, they didn't commit any crime during their time out of the hotel.

"The players fully accept that they should not have left the hotel, and also showed poor judgment in heading to a night spot and drinking, given preparations required for upcoming fixtures and the security position the team was in," Mills said.

Cairns to retire after England tour