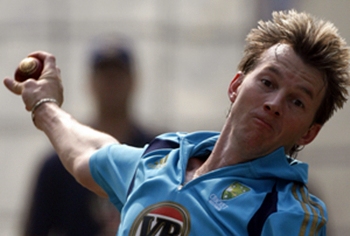 New South Wales were crowned inaugural Champions League Twenty20 champions after they snapped Trinidad and Tobago's fairytale run with a 41-run victory in a high-voltage summit clash in Hyderabad on Friday night.

In a showdown between the tournament's top two teams, Australian professionalism prevailed over Caribbean flair, with Brett Lee emerging the Aussies' star performer.

Put into bat, NSW fumbled and faltered in their innings, slumping to 83 for six in the 12th over, before Lee, who scored a whirlwind 48 off 31 balls, and Steven Smith (33) guided them to a fighting 159 for 9.

Trinidad & Tobago's chase never gathered momentum and Kieron Pollard's (26 off 15 balls) last-ditch attempt was not enough as the Caribbean side folded for 118 in 15.5 overs.

After his batting heroics, Lee (2/10) was in the thick of action again, claiming two quick wickets to reduce Trinidad and Tobago to 21 for three in the first eventful 14 balls.

Lee's second delivery castled the scoreless William Perkins, and the blond pacer returned to catch Lendl Simmons off his own bowling in the next over.

In between, Adrian Barath hit Steve Smith's first three balls for successive fours and followed it with a six before returning caught behind off the last delivery.

For T&T, crisis further compounded as Dwayne Bravo (17), captain Darren Ganga (19) and Denesh Ramadin (16) fell when the team needed them most.

Pollard (26) tried to replicate the form he had shown in the league match against NSW but Nathan Hauritz had other ideas. The match was over for T&T when Pollard fell in the 15th over.

Put into bat, NSW never really got going as Ravi Rampaul (3/20) and Dwayne Bravo (2/27) polished off the top order before some poor shot selections did the middle order in.

Down the order, Smith (33), however, refused to throw in the towel, and Lee then came up with a 31-ball blitzkrieg, which was studded with four fours and five sixes, before falling to the last ball of the innings.

David Warner and Phil Hughes have been key to New South Wales' success in the tournament thus far but the left-handed opening pair, for the first time, showed that they too have feet of clay.

Rampaul cleaned up Hughes (3) with the first delivery of his second over and then Bravo combined with Dave Mohammad to cut short Warner's (19) stay just when the stocky left-hander had started looking his ominous self.

Runs did not exactly flow, but Warner did manage those occasional boundaries that kept the scoreboard ticking before an airborne Dave Mohammad caught him at point.

overs with the score reading a mere 32, and it was clearly not the best of starts for the Australian side.

Simon Katich (16) decided to punish Bravo, hitting him for two sixes -- one miscued shot soared over the long-on rope and another effortless pull cleared fine leg -- in the same over before the pacer returned to settle scores.

Katich perished after chipping the ball to mid-off, leaving his team in complete disarray.

Three balls later, Moises Henriques (4) joined his captain in the hut, holing out in the deep off Kieron Pollard, and NSW were clearly in a hole at 49 for four.

Ben Rohrer (16) and Smith had just begun the bail-out act when Darren Ganga pressed Dave Mohammad into service and the left-arm chinaman bowler responded by removing Rohrer with his first delivery.

Rampaul returned to disturb Smith's timbers in the next over before Lee joined Smith in the middle to steady the ship.

Even after Smith returned, there was no containing Lee, who swung his bat to good effect to help the side cross the 150-mark, which had looked a distant dream at one stage.