News
Business
Movies
Sports
Cricket
Get Ahead
Money Tips
Shopping
Sign in  |  Create a Rediffmail account
Rediff.com  » Sports » 'I'm going to make sure my name's up there'

'I'm going to make sure my name's up there' 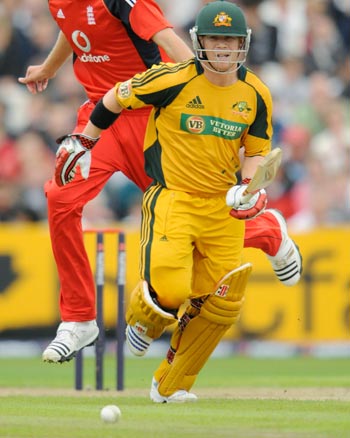 Australian batting tyro David Warner wants to attract the attention of selectors in all forms of the game.

Having been a huge hit on debut, Warner doesn't want to be typecast as a Twenty20 specialist.

Having represented his country at Twenty20 international level in England, he is in the NSW squad for the October Champions League, but then could be back playing grade cricket during Australia''s domestic season.

"If I can submit some good totals on the board, just keep pressing my claims forward, and if an injury comes up, I'm going to make sure my name's up there at the top of the list to take that,'' the Daily Telegraph quoted Warner, as saying.

Warner scored 33 off 26 balls in the first of two Twenty20 matches against England in Manchester on Sunday but is set to miss Australia's seven one-dayers.

Warner made his Australian debut in a Twenty20 international against South Africa in Melbourne in January.

The 22-year-old knows even if he is selected in Australia's one-day side to tour India in October and November, he may still be playing in Sydney's grade competition during the Australian summer.

Warner will still have to fight hard for a spot in a Blues batting line-up that has an embarrassment of riches, which in turn makes his ambition of breaking into the Test team more difficult.

Aus under-19 to tour India