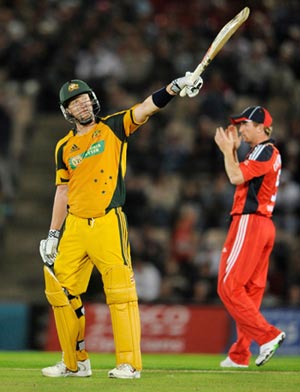 Australian batsman Cameron White scored a trouble-free century to consign England to a six-wicket defeat in the third one-day international in Southampton on Wednesday.

Chasing England's 228 for nine, White (105) put on 143 for the third wicket with captain Michael Clarke (52) to take Australia to the brink of victory and the tourists rounded off the win with nine balls to spare.

Australian opener Tim Paine contributed with 29 and Callum Ferguson (20 not out) sealed the result as England's bowlers struggled to capture wickets under the floodlights.

England captain Andrew Strauss once again led from the front with a solid 63 though he was poorly supported by the top order, and only Eoin Morgan (43) batting at six and Tim Bresnan (31 not out at eight) really took any fight to the Australian attack.

The tourists now lead the seven-match series 3-0 and a win in the fourth one-day international at Lord's on Saturday would clinch the series.