Their brief honeymoon with the number one tag over and their batting frailties exposed, India will have a score to settle when they take on Sri Lanka in the cricket tri-series final in Colombo on Monday.

The six-wicket win over New Zealand was the perfect start for Mahendra Singh Dhoni and his men as it not only booked them a place in the final but also made them the number one ODI side in the world. 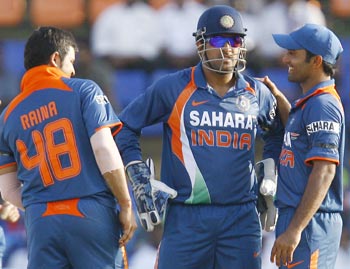 Barely 24 hours at the top and the joy had just started to sink in when Sri Lanka inflicted on them a moral-shattering 139-run defeat in their league encounter.

What would worry the Indian think-tank is that on all counts Sri Lanka proved much superior.

After drab low-score matches, the hosts piled up a massive 307 for six wickets, suggesting the Indian attack was far from intimidating.

And then the canny Angello Mathews, with his six-wicket haul, proved that there are enough chinks in the Indian batting armour as the visitors folded for 168 inside 38 overs.

It has been more than evident that despite best of efforts from both Sachin Tendulkar and Dinesh Karthik, India is missing its regular opening pair of Virender Sehwag and Gautam Gambhir.

The rollicking start that the team is used to has not been witnessed so far even though Tendulkar looked in good nick in both the matches.

The top order clearly has a brittle look about it and the return of someone as experienced as Rahul Dravid has not been able to gloss over the harsh reality.

Yuvraj Singh came here as a possible candidate to snatch the number one batsman's tag from his captain Mahendra Singh Dhoni but the left-hander has looked more impressive with the ball than with the bat.

Dhoni and Suresh Raina played sensibly against New Zealand to guide the side home but they could not repeat it when the chips were down against Sri Lanka.

Yusuf Pathan got just one chance so far in the series and could not make the most of it.

The bowling department that looked so impressive against New Zealand lost all its sting and fire overnight and looked pedestrian against the hosts.

Apart from Harbhajan Singh, other bowlers simply bled run and Ishant Sharma has looked a pale shadow of himself in the series so far.

In contrast, Sri Lanka have hauled themselves up after losing both the Twenty20 matches against New Zealand before coming into the tri-series.

They beat New Zealand in the first match and then outplayed India to swagger into the final at the R Premadasa Stadium where they have lost little.

Much to India's horror, Sanath Jayasuriya seems to have found his form just in time and his 79-ball 98 was an age-defying act by the 40-year-old 'Matara Marauder'.

Tillakaratne Dilshan has not converted the starts yet but the right-hander made every ball he faced count by scoring at a brisk rate.

Thilina Kandamby and Chamara Kapugedera proved they have matured head over their shoulder and if Kumar Sangakkara and Mahela Jayawardene join the party, India may have to return empty-handed again.

Why India is Clueless about China

India take over number one ranking in ODIs