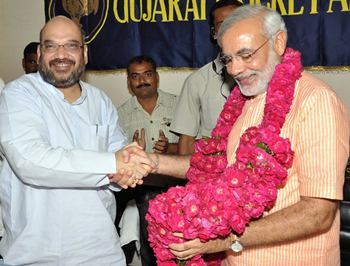 Chief Minister Narendra Modi on Tuesday opened an innings beyond the political arena when he was elected president of the Gujarat Cricket Association.

Modi follows in the footsteps of political bigwigs like Sharad Pawar and his own party leader, Arun Jaitley.

"At the AGM held at the Motera stadium in Ahmedabad, Modi was elected the president while Gujarat Minister of state for Home, Amit Shah, was elected vice-president of GCA," sources in the GCA said.

The GCA was till now controlled by Congress leader-led Narhari Amin group. Gujarat Home Minister Amit Shah was engaged in a long-drawn tussle with the Amin group for the last year-and-a-half for control of the affairs of the cash-rich cricket body.

Recently, the BJP gained control of the Central Board of Cricket of Ahmedabad (CBCA), which is a part of the GCA, from the Congress group, after which Amin resigned.

Modi's unanimous election comes a day after the BJP's resounding success in the Assembly by-polls in the state in which it won five seats out of seven.

"I express my gratitude to the members of the GCA who have elected me unopposed," Modi told reporters.

"I heartily thank all brothers related to cricket that they have selected me for this work. This is my first day.

"In one or two weeks time we will decide our plans to develop and propagate cricket and will also plan to use cricket's popularity in encouraging other sports. We will also try to create an environment where cricket players and sport persons get respect and pride," he added.

Modi said he would soon come out with a blueprint on how to develop the game in the state.

"I will sit with other members of GCA to form a blueprint on development of cricket. We will see how we can give it a professional touch by harnessing technology and how to develop the game through an integrated approach. The popularity of the game of cricket can be used to attract the youth to other sporting activity as well," he said.

"There is much more to do in cricket beyond playing the game with ball and bat on the field. We will try to give professional touch to that. We will plan for integrated development of cricket," Modi said.

"I promise people of Gujarat that the state will also make its mark in the field of sports," he added.

Former Board of Control for Cricket in India secretary Niranjan Shah welcomed Modi's entry to the Gujarat Cricket Association and expressed hope that cricket in the state will benefit.

Talking to media persons, Shah who is secretary of the Saurashtra Cricket Association, said, "I welcome his election as president of GCA and I heartily congratulate him.

"Modisaheb has been Chief Minister of the state and after becoming president of GCA I believe that cricket in the state will be encouraged further."

The state has three different associations affiliated to the BCCI -- Saurashtra CA, Baroda CA and Gujarat CA -- and all three associations will benefit following Modi becoming president of one of the associations, he added.

He also expressed the hope that Modi would now promote cricket and its infrastructure in the state.

Source: PTI© Copyright 2020 PTI. All rights reserved. Republication or redistribution of PTI content, including by framing or similar means, is expressly prohibited without the prior written consent.
Related News: GCA, Narendra Modi, BJP, Niranjan Shah, Former Board of Control for Cricket in India
SHARE THIS STORYCOMMENT
Print this article