By M J Manohar Rao and Srinivas Bhogle
Last updated on: September 18, 2009 21:55 IST
As we go into the Champions Trophy in South Africa, both India (69.53) and South Africa (69.97) are vying for the top place in the Rediff ODI Rankings. England (43.90) and New Zealand (50.08) are the big losers with bad losses in the NatWest Series and the Compaq Cup respectively.

The WI, based on recent ODI encounters between every pair of teams as shown in Table B, is essentially a weighted average that considers the 'opposition strength' (because wins against strong opponents must be rewarded more) and the 'home-away-neutral' factors (because teams usually win more at home, and lose more playing 'away').

The TI factors in a team's performance in tournaments and series (and thereby seeks to better reward wins in 'big' matches). The TI is currently based on a time window spanning the last 12 months, i.e. October 2008 to September 2009. South Africa rose by over 5 points because their defeat to England over a year ago has now gone out of the window.

Australia are third chiefly because their series win record in the 12 months is not good enough (see Table C). A win the Champions Trophy could catapult them back to the top place; by the same count, India and South Africa could crash if they fail to make the semi-finals or even the final.

In this update, we are pretending that Australia will make a clean sweep of the ODI series in England. Even if England win the last ODI of the 7-match series, the change in the rankings will be very marginal. 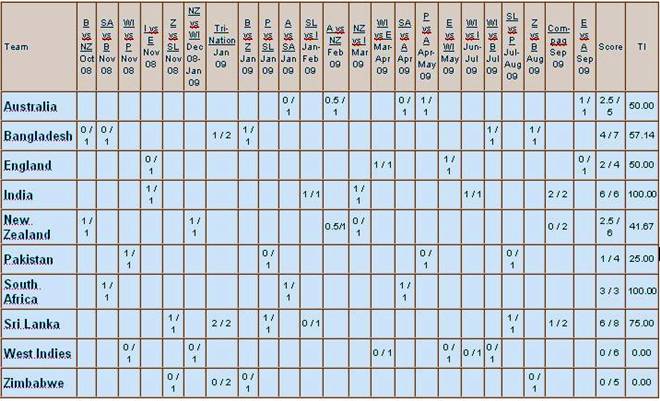 Our next update will appear after the Champions Trophy starting next week in South Africa.