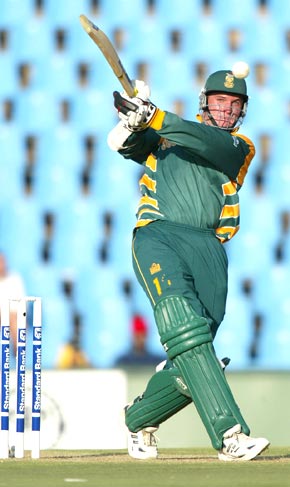 Desperate to end their 11-year title drought in major ICC tournaments, South Africa would look to exploit home conditions and start on a winning note when they take on Sri Lanka in Champions Trophy opener in Centurion on Tuesday.

Graeme Smith's side, who dethroned Australia from the No 1 spot in one-dayers, would want to ensure that they do not have a false start in a tournament they won in 1998 when they beat West Indies in Bangladesh.

Since then, South Africa haven't even managed to make the final of an ICC tournament. Their World Cup woes have earned them the tag of 'chokers' and their Champions Trophy record has done nothing to erase that label.

But after a brilliant season last year, the Proteas are confident of being third time lucky at home after failing to win the 50-over World Cup in 2003 and World Twenty20 Championships in 2007.

No South African was named in the shortlist of this year's ICC awards and captain Smith and coach Mickey Arthur have said they would want to do well in the Champions Trophy to get over that disappointment.

Sri Lanka, on the other hand, would also want to make a winning start in a tournament which they had won jointly with India at home in 2002.

Moreover, they will get another chance to show that they do not always struggle on the bouncy tracks of South Africa and Australia.

South Africa though will miss the services of opening batsman Herschelle Gibbs who suffered a rib injury in their warm-up game against the West Indies on Friday, though he will recover in time for the remaining matches in Group B which also has New Zealand and England.

The likes of Smith, AB de Villiers, Jean-Paul Duminy and Jacques Kallis were in fine form last season but they will have to ensure that there is no rustiness in their first international match after the Twenty20 World Cup in June.

In the bowling department, medium pacer Wayne Parnell and left-arm spinner Roelof van der Merwe will have to show that their fine performances in the Twenty20 World Cup were no fluke.

Sri Lanka do not have any injury worries though they will be playing without Chaminda Vaas. They will be bolstered by the return of spin wizard Muttiah Muralitharan who did not play in the recently-concluded Compaq Cup tri-series due to an injury.

Kumar Sangakkara's men will depend on senior players like the captain himself, Sanath Jayasuriya, Mahela Jayawardene and Tillakaratne Dilshan to give them a good total when batting.

Apart from these veterans, youngster Thilina Kandamby, who had done well in the Compaq Cup, would also be expected to chip in to see that Sri Lanka are not over-dependent on the senior players.

IPL auction: Who gained the most