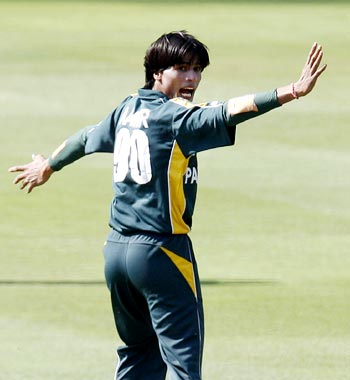 Fast bowlers Mohammad Aamer and Umar Gul shared six wickets as Pakistan beat the West Indies by five wickets in the opening Group A match of the ICC Champions Trophy, in Johannesburg, on Wednesday.

The West Indies' second string side was all at sea against the Pakistan pace battery and dismissed for a paltry 133 in 33.4 overs.

In reply, Pakistan stuttered before an unbeaten stand of 58 from Umar Akmal and Shahid Afridi saw them home with over 19 overs to spare.

Pacer Gavin Tonge, who claimed four wickets for 25 runs in his 10 overs, gave the Pakistan camp early jitters, but Umar Akmal saw the former World champions home with an unbeaten 41 from 51 deliveries.

Things didn't start off well for Pakistan with the bat, as opener Imran Nazir fell in the second over of the innings. The right-hander tried to play pacer Tonge across the line through the leg side but ended up missing the ball completely and was bowled for 5.

Kamran Akmal also scored five before he played at a wide delivery and was caught behind by wicketkeeper Chadwick Walton in the sixth over.

Mohammad Yousuf (1) enjoyed an early slice of luck when Darren Sammy failed to latch on to a tough chance diving to his right off Tonge in the eighth over. But after a few early jitters sort of found his footing when he slammed Tino Best for two boundaries as Pakistan reached 53 for two after 13 overs.

Tonge, however, had his third scalp when Shoaib Malik edged behind for 23.

Very soon, the Windies pacer bagged his fourth wicket of the innings when Yousuf was given out caught behind for 23 despite the ball having gone off the thigh pad.

Suddenly the West Indies had a glimmer of hope as Pakistan were reduced to 61 for four in the 16th over with Tonge boasting impressive figures of four for 16 in eight, including three maidens.

Things got worse for Pakistan when batting mainstay Misbah-ul Haq offered keeper Walton his fourth catch of the innings, edging David Bernard. Pakistan were in trouble at 76 for five in the 23rd over.

However, Umar Akmal dashed any hopes the inexperienced West Indies attack might have entertained with a quick knock of 41 from 51 deliveries, inclusive of six boundaries.

The youngster started off cautiously, scoring just eight runs from the first 30 deliveries he faced, but once he got his eye in, the boundaries started flowing.

Stand-in captain Afridi was happy to let Akmal steal the limelight as he resorted to playing second fiddle. He finished unbeaten on 17 from 25 deliveries as Pakistan cruised to 134 for five in 30.3 overs.

Earlier, electing to bat, the West Indies, playing without their regulars, had a terrible start to their innings. Aamer struck in the first over of the match, having Dale Richards (1) caught and bowled off his own bowling.

Naved-ul-Hasan, back after his stint with the rebel Indian Cricket League struck soon. He had Andre Fletcher caught by Imran Nazir at backward point for seven, leaving the West Indies reeling at 11 for two after four overs.

Travis Dowlin (0) fell in the next over when he tried to cut Aamer but got the bottom edge, which was taken behind by wicketkeeper Kamran Akmal.

Devon Smith made 18 from 28 balls before he was done in by Umar Gul, who beat him with extra bounce and had him caught at second slip.

David Bernard (6) was beaten all ends up by the incoming delivery from Aamer as West Indies were reeling at 43 for five in the 14th over.

Gul made sure there was no fightback from the depleted West Indies as he continued Pakistan's dominance with two wickets in his fourth over.

Captain Floyd Reifer failed to inspire his team. He top-edged to Misbah-ul-Haq at first slip after a painstaking knock of 7 from 23 deliveries.

Chadwick Walton fell to the very next delivery when he tried to play Gul across the line on the leg side but was struck plumb in front of the stumps.

Darren Sammy tried to restore some respectability to the innings with a solid knock of 25 off 37 balls before he was bowled by off-spinner Saeed Ajmal.

Just when it looked as if Pakistan would finish off things pretty quickly, Nikita Miller changed the script somewhat with an entertaining knock of 51 from 57 deliveries, inclusive of six boundaries and a six.

Miller added a valuable 36 for the ninth wicket with Tino Best to help the West Indies cross the 100-run mark.

The West Indies took the batting Powerplay in the 27th over and Miller brought some cheer to their dressing room when he slammed Ajmal for three boundaries.

Best scored nine before he was stumped by Akmal off the bowling of Ajmal in the 32nd over.

Miller then decided to take matter into his own hands as he slammed Afridi for a huge six over the cover region. He then took a single through midwicket to bring up his first half-century in one-dayers off just 51 deliveries.

However, Afridi extracted revenge in his next over. He had Miller caught at long-on attempting another big shot as the West Indies were dismissed for 133 in 34.3 overs.

Aamer finished with respectable figures of three for 24 in seven overs, while Gul took three for 28 in eight.