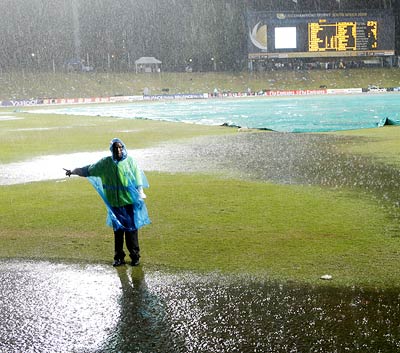 Australia's batsmen fired on all cylinders against India before rain forced the Group A match in the ICC Champions Trophy, at SuperSport Park in Centurion, on Monday, to be abandoned.

The players were forced to rush off the field with the scoreboard reading 234 for four after 42.3 overs as heavy rain lashed the stadium.

Opener Tim Paine gave the team a good start, smashing a quickfire 56 from 58 deliveries, before falling to leg-spinner Amit Mishra in the 17th over.

Ricky Ponting then took centrestage, scoring a brisk 65 from 88 deliveries; he added 88 runs for the third wicket with Michael Hussey, who made a brisk 67 from 65 deliveries.

The Indian bowlers, except for Ashish Nehra who took one for 38 in eight overs, struggled to live upto expectations and were carted all around by the Aussie batsmen.

With India and Australia getting a point each from this abandoned match, Pakistan are assured a berth in the semi-finals after two wins from two matches.

India (1 point, Net Run Rate -1.08) will need to beat the West Indies in their last group match by a big margin, while hoping that Pakistan also defeats Australia (3 points, Net Run Rate +1.00) by a huge margin.

Left-armer Ashish Nehra started off with a maiden first over of the match, a couple of deliveries jumping off the length and surprising Watson. Praveen Kumar then bowled a good follow-up over, conceding just two runs while keeping it full and tight.

The early pressure paid off as Watson was out for a duck, his second straight one, attempting to break the shackles. Nehra surprised him with a quick short delivery

which he tried to pull but ended up lobbing a simple catch to Harbhajan Singh at midwicket. (3-1, 2.2)

The Indian pacers kept it tight as Australia posted 12 for one after five overs, having hit just one boundary.

India missed out on a golden opportunity to claim the second Australian wicket, that of Tim Paine for six. Paine attempted a quick single as Dhoni sent a quick

return to the non-striker's end, but the bowler, Kumar, failed to collect the ball, in the sixth over.

In a shocking move, Dhoni took Nehra out of the attack after just four overs and brought Ishant Sharma in his place. The move backfired as Ishant dropped short

and was slammed for two boundaries and six and went for 16 runs in the ninth over as Australia gained momentum.

Ponting then took on Kumar from the other end as he lofted him straight down the ground for a big six in the tenth over.

Leg-spinner Amit Mishra introduced early in the 12th over and nearly picked a wicket but Paine's edge sneaked in between the wicketkeeper and first slip.

Ishant continued to disappoint and Paine carted him for successive boundaries in the 13th over, the seamer yet again looking clueless as the batsmen looked to take the attack to him.

Australia looked to get after Harbhajan Singh straight away as Paine employed both the sweep and reverse sweep for two boundaries in his first over. Those couple of boundaries also brought up the Aussie opener's half-century off just 51 deliveries, inclusive of seven boundaries and a six.

Mishra then gave his team a big boost when he got the wicket of the dangerous Paine for a quick knock of 56 from 58 deliveries. The right-hander attempted a fine paddle sweep against the leg-spinner but got a top edge which was taken by Harbhajan at midwicket. (87-2, 16.4)

Paine had done a good job at the top of the order adding 84 runs in 86 deliveries for the second wicket with Ponting.

Australian captain Ponting was having no problems at all as he milked the bowling around with ease helping his team reach a solid 105 for two after 20 overs.

Mishra impressed with his control and the turn that he extracted from the track, but Harbhajan struggled as Australia milked him around for easy singles.

While Mishra bowled a good opening spell of one for 28 in seven overs, Harbhajan failed to live upto expectations again as he gave away 37 in six overs.

Ponting looked determined to make the most of batting first on a good wicket. He coasted to his half-century off 67 deliveries, hitting just three boundaries and a  six, while accumulating 24 singles and four doubles.

Once again the Indian bowlers were found wanting in the middle overs as runs were conceded in a rush. Michael Hussey raced to 42 from 36 deliveries, while Ponting was unbeaten on 55 from 79 deliveries as Australia were comfortably placed at 158 for two after 30 overs.

Just when it looked Australia were running away with the game, India struck against the run of play with the big wicket of Ponting for 65. Australia's captain, who hit four boundaries and a six in his 88-ball knock, went for a tight second run but was caught short at the non-striker's end by a direct hit from Gautam Gambhir. (175-3, 32.5)

The wicket came as a huge relief to India as the Hussey-Ponting partnership put on 88 runs off 97 deliveries for the third wicket without much effort.

Hussey brought up his half-century off just 45 deliveries, inclusive of four boundaries, off the next delivery with a single on the off-side off Nehra in the 33rd over.

Overhead conditions got worse and it seemed rain would hit the stadium any moment. Smartly, Australia opted to take the Powerplay, deciding to make most of the fielding restrictions in case if there was any rain later on.

For the second match in a row there seemed to be no end to Harbhajan's struggle; he gave away 51 runs in eight overs.

New-man Cameron White wasted no time in getting after the off-spinner and lofted him over mid-off for a boundary in the 36th over, the first of the Batting Powerplay overs.

The Batting PowerPlay went to script for Australia as they hammered 44 runs in the five overs without losing a wicket.

Cameron White ensured Australia continued to dominate as he raced to 32 from 23 deliveries, inclusive of two huge sixes, as Australia reached a strong 227 for three after 40 overs.

Ishant, who struggled for the second match in a row, finally had a brief moment of joy when he claimed of wicket of Hussey. The left-hander lofted one straight to long-off fielder Sachin Tendulkar after a fine innings of 67 from 65 deliveries, inclusive of five boundaries.

Finally the brief flashes of lightning were accompanied by a heavy shower and the covers were called on with Australia on a comfortable 234 for four after 42.3 overs. Cameron White was unbeaten on 35 from 30 deliveries, while Calum Ferguson was not out on 2.

Australia, who won the toss and elected to bat against India, went in with the same team that beat West Indies by 50 runs in their opening match.

India, who lost to Pakistan by 54 runs in their first match, need to win this match to stay in contention for the semi-finals. If Australia win this match they will make it to the last four from Group A along with Pakistan.

India made a couple of changes bringing in leg-spinner Amit Mishra in place of Yusuf Pathan, while Praveen Kumar replaced RP Singh.

India captain Mahendra Singh Dhoni pinned hopes on his seamers putting in a good performance after their disastrous showing against Pakistan.

"The seamers are making just small mistakes. We are bowling a bit short but I am sure we can bounce back," Dhoni said at the toss.