Pietersen: Star of the RCB show 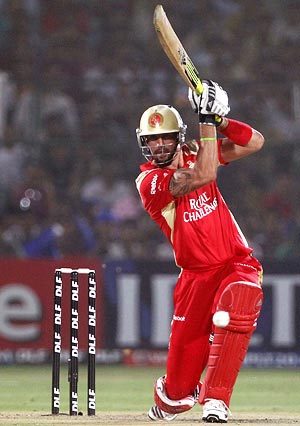 It was a Kevin Pietersen show at the Sawai Mansingh Stadium in Jaipur on Wednesday night.

The Englishman picked up a plethora of awards including the man-of-the-match honours.

His 29-ball 62, inclusive of 10 hits to the fence and two over it, helped Royal Bangalore Challengers to a comfortable five-wicket win over Rajasthan Royals.

It was his second half century in the tournament - after his unbeaten 66 against Kings XI Punjab earlier in the month.

It was also the second time he had been awarded the man-of-the-match.

Pietersen was also involved in a crucial 60-run third-wicket partnership with Robin Uthappa (26) - a partnership that laid the foundation of the win.

He went ballistic in Kamran Khan's second over blasting 18 runs - including three boundaries on the trot followed by a massive six over midwicket.

And never looked back thereafter, his efforts earning his team a berth in the semi-finals.