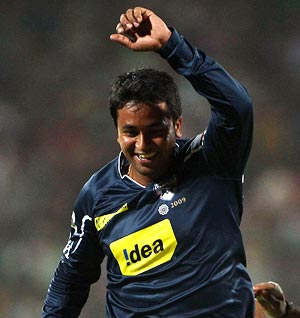 Deccan Chargers had their task cut out as they approached the last few games in the tournament. The defending champions had to win their last five games to make it to the semi-finals. And, against all expectations, they made it.

It was a virtual quarter-final against Delhi Daredevils in Delhi on Sunday. And, it was Deccan who thrived under pressure to register an important 11-run victory.

The top order failed to fire before Andrew Symonds rescued them with a quickfire half-century. He went after Delhi's best bowler, Amit Mishra, carting him for two huge sixes down the ground.

Part-timer Tillakaratne Dilshan also came under the fire as Symonds slammed for two sixes through the leg side in his first over.

Even though Deccan's lower order struggled in the final few overs, Symonds's blazing 54 from 30 balls, inclusive of three boundaries and five sixes, ensured they finished on a competitive 145 for seven in their 20 overs a slow wicket at the Ferozshah Kotla.

The pacers gave Deccan a wonderful start, reducing their opponents to 33 for three in the fourth over.

But it was Ojha who dealt the big blow to Delhi with the wicket of the in-form captain Gautam Gambhir, for four, in his first over. Gambhir was brilliantly caught at midwicket by Rohit Sharma, who took three brilliant catches to boost his team in the early overs.

Once again, Ojha was proving to be a difficult bowler to get away. Dinesh Karthik (1) fell to a superb delivery from Ojha that pitched on middle and spun sharply past his bat to knock back the off-stump.

The left-arm spinner was hit for just one boundary, which also was a result of a misfielding at mid-on, and finished with remarkable figures of two for 16 in his four overs.