The Pollard(isation) of Mumbai Indians

Mumbai Indians paid a bomb to acquire his services. 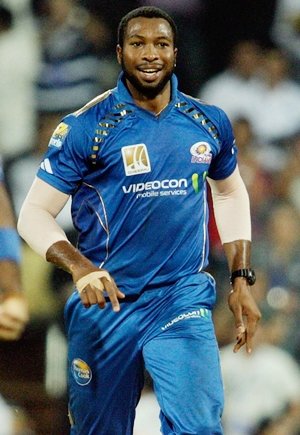 And the burly West Indies all-rounder is now returning the favour with a string of inspiring efforts, both with the bat and ball.

His showing on Wednesday ensured Mumbai Indians a passage to the final at the expense of Royal Challengers Bangalore.

No wonder, he was named the man-of-the-match.

"Thanks to the team for their support and the management for sticking with me," said a relieved Pollard, after winning his award.

He used his long handle to good effect to guide Mumbai to an imposing 184 for five in the last four tie.

He smashed 33 off only 13 balls, a knock inclusive of three sixes and a boundary. It was his onslaught that ensured his side a whopping 77 runs in the last five overs and 43 in the last three.

He smashed 17 runs of R Vinay Kumar's penultimate over, including two sixes over long-off, to give the total the required fillip.

And despite a strained hamstring, the burly West Indies player came back to bowl four overs, and impressed with the ball as well.

He finished with figures of three for 17.

He first had the dangerous Robin Uthappa caught by Shikar Dhawan at deep square leg, then induced an edge off Virat Kohli's blade in his third over and came back to account for Manish Pandey - caught by JP Duminy at deep midwicket - in his final over to finish an already glorious day on a high.