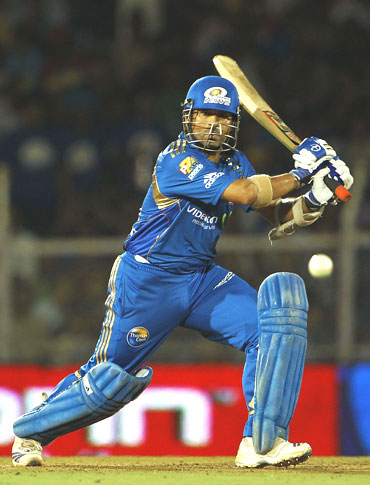 The IPL-3's most prolific batsman, Tendulkar, who turned 37 on Saturday, has 570 runs in his kitty from 14 matches, inclusive of five fifties.

He beat back competition from Royal Challengers' batsmen Jacques Kallis (553 runs from 15) and Robin Uthappa (374 from 15) and Chennai Super Kings' Suresh Raina (463 from 15) and Murali Vijay (432 from 14) for the Jury Award for best batsman.

Tendulkar, who is uncertain to lead Mumbai Indians in Sunday's IPL final against Chennai Super Kings after splitting the webbing in his right hand during the first semi-final on April 21, was also named best batsman and best captain in the Viewers' Choice category.

Left-arm spinner Ojha is the most successful bowler of IPL III with 21 wickets in his kitty from 15 matches. He beat back competition from his team-mate Ryan Harris, Ravichandran Ashwin (Chennai Super Kings), R Vinay Kumar (Royal Challenger Banaglore) and Zaheer Khan (Mumbai Indians).

Delhi Daredevils' AB de Villiers was declared best fielder while West Indian Kieron Pollard was named for best debut performance for his superb all-round performance with the bat and ball.

Among other Jury Awards, Kallis, who also has 11 wickets from 15 matches, was named for the most consistent performance award.

The Awards Night was boycotted by the top brass of the Board of Control for Cricket in India.

The entire IPL Governing Council, barring Sunil Gavaskar and IS Bindra, also shunned the event though most of the players were present.

Indian cricketing legend I would want in my team: Kapil Dev.