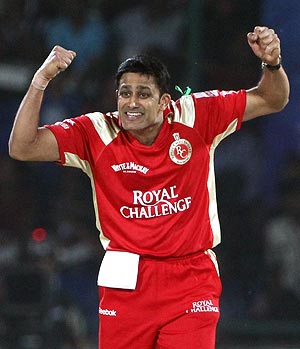 Once again Anil Kumble proved that whatever be the format, he still reigns as one of the top spinners in the world.

He took a four-wicket haul to help Royal Challengers Bangalore thump Deccan Chargers and finish third in the Indian Premier League. The victory also saw them qualify for the Champions League Twenty20.

Just a couple of years back, Kumble and a few other senior players from the Bangalore team were rated as not being suited for Twenty20 cricket.

But, as witnessed in last year's IPL -- and again this season, only a fool would write off Kumble's genius.

Since it's inception Twenty20 has been labelled as a youngster's game, but Kumble, at 39, proved that there is no substitute for experience, even in the shortest format.

The veteran leggie spun a web around Deccan's batsmen, claiming four wickets for just 16 runs,  while Jacques Kallis (two for three) and Praveen Kumar (two for 18) provided good support from the other end to bundle out the defending champions for a paltry 82 in 18.3 overs.

The Bangalore captain, also known as Jumbo, gave his team the perfect start when he scalped the dangerous Adam Gilchrist in the very first over of the match. He then accounted for Deccan's second overseas player when he bowled Dwayne Smith with an incoming delivery.

He finished off things, by claiming two more wickets in his final over, those of Ryan Harris (3) and Pragyan Ojha (0).

With 83 to chase, Bangalore started off cautiously before Kevin Pietersen finished off things in style with a six to script a comprehensive victory.