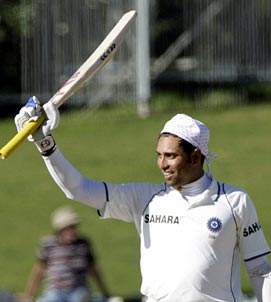 VVS Laxman's fluent century guided India to a convincing five-wicket victory to level the three match series 1-1 on Day 5 of the third and final Test, at the P Sara Oval, in Colombo, on Saturday.

India's batsmen negotiated the conditions quite superbly on the final day to cruise to 258 for five in 68.3 overs on a pitch offering a lot of assistance to the spinners.

Laxman, struggling with a back injury, finished unbeaten on a splendid innings of 103 from 149 balls, having hit 12 boundaries. He batted with a runner for most part of his innings, but his batting against the spinners was quite magical as he used his wristy shots to good effect.

Suresh Raina also made an impact as he hit a brisk 41 from 45 balls, ending the match in style with a huge six over long-on. The two batsmen shared an unbroken stand of 87 runs in 102 balls for the sixth wicket to carry their team home.

Sachin Tendulkar, who was dropped on 18 at short leg off Randiv, scored a patient 54 before he was caught down the legside off Randiv. The veteran, who hit three boundaries from 122 balls, added 109 runs in 30 overs for the fifth wicket with Laxman to bring India back in the contest.

Off-spinner Suraj Randiv was Sri Lanka's hero with the ball, claiming all the five Indian wickets to fall, for magnificent figures of five for 82 in 29 overs to claim nine wickets in the match.

Half-centuries from Thilan Samaraweera and Ajantha Mendis had helped Sri Lanka to post a fighting 267 in their second innings.

Ajantha Mendis, who hit his maiden fifty in Tests, played a vital knock of 78 from 157 balls before he was caught in the covers off Amit Mishra. Samaraweera, who hit a century in the first innings, again came to the team's rescue. He scored 83 from 138 balls, putting on 118 for the ninth wicket with Mendis to register Sri Lanka's best ninth-wicket partnership in Tests and helping them comeback after they were reeling 87 for seven at one stage.

All the three Indian spinners -- Pragyan Ojha, Amit Mishra and Virender Sehwag -- made most of the conditions, claiming three wickets each. Ojha was the pick of the bowlers, taking three for 89 in 89, to follow up on the four for 115 he took in the first innings. Part-timer Sehwag made an important contribution with the ball, claiming three for 51 to go with his quickfire century (109) with the bat, while Mishra took three for 47.

Sri Lanka had won the first Test by 10 wickets, while the second ended in a high-scoring, dull draw.

As we have witnessed right through the Test, once the ball gets old it becomes easy for batting and the bowlers struggle. Tendulkar came out aware of that and took his time, slowly grinding down the Sri Lankan bowlers, while Laxman looked in top form right using his wrists to good effect right from the start.

If the session started well for Sri Lanka with an early wicket, India ended it well by scoring 92 runs in 29 overs to inch closer to the target.

Suraj Randiv continued his wicket ways as he claimed his fourth wicket, in his 11th over. He dismissed Ishant Sharma in his second over of the day, when he got him caught at short midwicket for four.

The off-spinner would have completed his five-wicket haul but Tillakaratne Dilshan at short leg messed up an easy chance off Tendulkar (18). The master batsman immediately rubbed further salts on Randiv's wounds by charging down the wicket and driving him past mid-off for the first boundary of the day.

VVS Laxman played a confident shot early on, driving Randiv down the ground for his first four. The stylish right-hander then got his second boundary when he pulled a short delivery from Chanaka Welegedara through the midwicket region.

Tendulkar also ensured that the scoreboard kept ticking along as he looked to rotate the strike by hitting the ball in gaps, but Laxman was looking for the boundaries.

As the ball got older, it was proving quite easy to bat for India's two senior pros. Without taking any risks and with the minimum of efforts, Laxman hit two delightful two boundaries against Mendis in his second over of the day, which also brought up the 50-run partnership for the fifth wicket.

Surprisingly, Sri Lanka also went on the defensive which allowed the Indian batsmen to get singles with ease. Even the spinners were operating from round the wicket with no close-in fielders around the bat to put pressure on the two batsmen.

Tendulkar brought up his half-century off 106 balls with a single on the leg side in the final over of the session. The master batsman had adjusted to the situation quite well, looking to bat out the first session with minimum of risks, as his fifty contained 28 singles.

At lunch on the final day, India recovered well to reach 145 for four in 38 overs, still needing another 112 runs for victory.

Tendulkar continued his good recent form as he completed yet another half-century and was unbeaten on 50 from 106 balls. Laxman took the pressure off Tendulkar as he scored 46 from 76 balls with four boundaries during their 83-run stand.

Laxman once again thrived under pressure with a brisk half-century. He brought up the landmark off 81 balls with a single on the off-side against Malinga, in the 49th over.

The right-hander, despite suffering from a back problem, kept the boundaries coming. He flicked Malinga fine on the leg side and then pulled a short delivery over square leg for two boundaries and take the total to 171 for four in 51 overs, with 86 needed for victory.

Laxman took a six-minute break to receive treatment for his back spasms and that interval seemed to have broken Tendukar's rhythm. Tendulkar tried to play the fine paddle sweep against Randiv but was caught down the leg side by wicketkeeper Prasanna Jayawardene.

The veteran, who made 54 from 122 balls, added 109 runs for the fifth wicket with Laxman to revive India's hopes.

Suresh Raina seemed in a rush right from the start. He was lucky early on as he lashed at a wide delivery from Malinga and the thick outside edge just brushed Jayawardene's fingers at first slip before going into the boundary.

Sehwag came in as Laxman's runner, but the injury was not hampering the Hyderabadi's strokeplay. The right-hander pulled Randiv and Malinga through the leg-side for a boundary each in back to back overs to take the total to 187 for five in 55 overs.

Raina also showed great purpose as he look to collect singles at every opportunity, while Laxman's wristy shots got him singles at will helping the scoreboard move along at a good rate.

Sri Lanka brought in Tillakaratne Dilshan to make a breakthrough but Raina went after him straightaway. The left-hander charged down the wicket and lifted it over midwicket for a boundary and a couple of overs later he cracked Randiv through that region again for another four.

Laxman brought up the 50-run partnership in fine fashion when he once again pulled a short delivery from Mendis through the leg side. In the next over, his golden touch came to the fore when he caressed a full delivery from Randiv through the covers for this tenth four to move into the 90s.

Raina continued his search for boundaries as he charged down the wicket to Mendis and carted him down the ground for yet another boundary.

Laxman brought up his century, his first in Sri Lanka, in some style with back to back boundaries off Mendis. First, he hit a full toss through the covers and the next delivery was played fine on the leg side to complete the three-figure mark off 146 balls.

In the next over, Raina ended the match in commanding fashion when he slammed Welegedara over long-on for a huge six.

The Sri Lankan bowlers, except for Randiv, disappointed as they kept pitching it short and gave some easy boundaries. Randiv was superb with the ball as he claimed five for 82 in 29 overs for excellent match figures of nine for 162, but Mendis disappointed as he went wicketless in the second innings.

In the end, the Indian batsmen's experience stood out and they proved why they still deserve to be the number one ranked team in Test cricket.