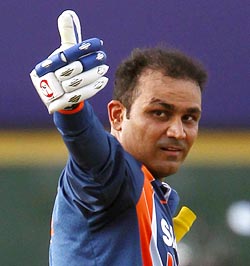 Virender Sehwag's quickfire century was backed up by a good showing with the ball, as India crushed New Zealand by 105 runs and stormed into the tri-series final in Dambulla on Wednesday.

Sehwag's knock was the highlight of an otherwise disappointing performance by the Indian batting line-up. The dashing opener rescued the team, after the loss of a few early wickets, with an entertaining 110 from 93 balls, inclusive of 16 boundaries and a six. He added 107 runs in 19.2 overs with captain Mahendra Singh Dhoni, who played a steady knock of 38 from 75 balls.

New Zealand never really got to grips with the conditions and kept losing wickets at regular intervals. Praveen Kumar, who started with a wicket in the first over, made the new ball count as he claimed three for 34 in eight overs. Munaf Patel also made a good comeback, claimng three for 21 and Ashish Nehra took two for 10.

Kyle Mills was the top-scorer for New Zealand with 52 from 35 balls, inclusive of seven fours and three sixes, but no other Kiwi batsmen got past the 20-run mark.

Tim Southee had earlier taken four wickets to help New Zealand dismiss India for 223. The 21-year-old pacer claimed four for 49 in ten overs, as India were bowled out in 46.3 overs, eight batsmen scoring in single digits, on a pitch favouring the pacers a bit.

India take on hosts Sri Lanka in the final on Saturday.

India were off to a horrible start as opener Dinesh Karthik fell for a duck in the first over to Kyle Mills. Karthik flirted with a wide delivery outside the off-stump only to edge it behind to wicketkeeper Grant Hopkins.

After a cautious start, Sehwag decided it was time to cut loose. He slammed Mills for three back-to-back boundaries through the leg side, which also saw him complete 1000 boundaries in ODIs. The right-hander became the fourth batsman after Sachin Tendulkar, Brian Lara and Ricky Ponting to hit 1000 or more boundaries in ODIs and Tests.

But soon India were in trouble again, as Southee claimed the wicket of Virat Kohli. The right-hander, who was adjudged caught behind for eight, looked in disbelief at umpire Ashoka de Silva's decision and walked back reluctantly.

Sehwag continued to punish Mills, hitting him through the point and midwicket region for another couple of boundaries, in the seventh over.

A couple of overs later, he attacked young Southee as he hit him through point and lofted him over mid-off for back-to-back boundaries to race to 35 from 28 balls.

Yuvraj Singh cracked a full delivery from Andy McKay through covers for his first boundary to take the total to 53 for two after ten overs.

With Sehwag scoring boundaries at will, all Yuvraj needed to do was play himself in and rotate the strike. But he did exactly the opposite; he played a reckless shot and threw his wicket away. The left-hander tried to pull a short delivery from Andy McKay but got a top edge and was caught by wicketkeeper Hopkins for six.

India were left reeling at 66 for four after 13 overs.

There was no stopping Sehwag though. He lofted Scott Styris over the cover region for his ninth boundary and raced to his fifty from 41 balls, in the 15th over.

Mahendra Singh Dhoni also helped himself to a couple of boundaries through the off-side against Styris in his first over.

Dhoni and Sehwag made steady progress in the middle overs as they rotated the strike with ease, while also hitting the odd boundary in between.

Sehwag hit the first six of the match, stepping down the wicket to Nathan McCullum and lifting him down the ground, in the 26th over.

He didn't waste time in the nervous nineties and lifted Kane Williamson over the off-side for a four to reach 99. The next delivery he took a single in the covers to bring up his 13th ODI hundred from just 87 balls, in the 31st over.

The boundaries kept coming as Sehwag glanced Mills fine on either side of the wicket for successive boundaries in the next over.

But, against the run of play, New Zealand struck with the big wicket of Sehwag. The India opener, who smashed an entertaining 110, played across the line and lofted McCullum straight to the fielder at deep square leg.

Sehwag, who hit 16 boundaries and a six in his 93-ball knock, rescued India as he added 107 runs in 19.2 overs for the fifth wicket with Dhoni.

Ravindra Jadeja got off the mark in streaky fashion as he tried to avoid a short rising delivery outside the off-stump but somehow it hit his bat and went for a four through the covers. But his second boundary was much more convincing as he flicked McKay through the leg side, in the 36th over.

However, India's chances of posting a total in excess of 250 all but ended when Dhoni lost his wicket. He tried to drive McCullum through the off-side but got an edge and was caught by Hopkins after a slight fumble for 75-ball 38.

Jadeja's agony ended when he was done in by a bouncer from Southee. The left-hander struggled against the pacers before he tried to fend a short delivery and was caught on the off-side for 17.

India finally decided to take the Bowling Powerplay after 42 overs, but without success, as the tailenders also surrendered tamely.

Ashish Nehra (0) lobbed an easy catch back to the bowler, McCullum, while Praveen Kumar top edged a pull off Southee and was caught on the leg side for six.

Mills ended the innings when he foxed Munaf Patel with a slower delivery; the batsman charged down the wicket and gifted an easy catch to the mid-on fielder for seven.

Ishant Sharma was left stranded on eight as India were bundled out for 223 in 46.3 overs. It was the third time in four matches in the tournament that India failed to bat through their quota of 50 overs.

Southee was excellent with the ball as he chipped in wickets in every spell for wonderful figures of four for 49 in ten overs, including two maidens. McCullum also impressed, claiming three for 35, while Mills took two for 42.

India were off to a perfect start with the ball as Praveen Kumar struck in the first over of the innings. Martin Guptill was trapped plumb leg before wicket and dismissed for a golden duck for the second match in a row.

With the ball moving around considerably, the Kiwi batsmen found it difficult against the new ball and wickets kept tumbling.

Ashish Nehra got one to swing in sharply, beat BJ Watlin all ends up and rattled his stumps, for two.

Kumar then claimed the important wicket of captain Ross Taylor after he was hit for two back-to-back fours. Taylor edged an outswinging delivery that pitched just outside the off-stump and was caught behind by Dhoni for eight as New Zealand were reduced to 14 for three in the fifth over.

Interestingly, Nehra's figures read one for three in three overs and all three runs he conceded were wides.

Kumar continued chipping away at the wickets to worsen New Zealand's plight. Veteran Scott Styris played away from his body but only managed to drag it back on to his stumps and was bowled for one. The Kiwis slipped 23 for four in nine overs.

It was a disciplined performance by the Indian seamers as they bowled three maiden overs inside the first ten overs, while giving away just two fours.

Kane Williamson broke the shackles somewhat when he clipped Munaf through the leg side for a four, the first after nearly eight overs, in the 13th over.

However, the youngster didn't last long enough as he was beaten by an incoming delivery from Ishant and bowled for 13.

Grant Hopkins fell in the very next over when he was also beaten by the inswinger and bowled by Munaf for a duck.

The runs were difficult to come by and boundaries were a rare sight. Grant Elliott stroked only the fourth boundary of the innings when he flicked a full delivery from Ishant through the leg side.

However, he was dismissed in the next over, trapped leg before wicket by Munaf after a painstaking 11 from 38 balls.

Nathan McCullum top edged a pull shot against Munaf and was caught at mid-off for five as New Zealand kept losing wickets quite regularly.

There was some entertainment towards the end as Kyle Mills went after the Indian bowlers.

Mills looked to counter-attack as he slammed Ishant for four boundaries in the 24th over, which also made him the highest scorer of the innings.

Tim Southee (10) also looked to attack and launched Ravindra Jadeja down the ground for a huge six. However, he fell off the very next delivery, hitting down the throat of the fielder at long-on attempting the same shot.

However, Mills continued his attacking batting and slammed Jadeja down the ground for back-to-back sixes in his next over.

He then pulled Kumar through fine leg for a boundary, followed by another pull for six over midwicket to take the Kiwis past the 100-run mark in the 28th over.

Mills then despatched a slower delivery from Kumar down the ground to race to 48 from just 28 balls, inclusive of three sixes and six fours. The right-hander then smashed Nehra through the off-side for yet another four to raise his fifty from just 32 balls, in the 29th over.

However, Nehra ended Mills's entertaining innings when he had him caught at long-on. Mills made 52 from 35 balls, having hit seven boundaries and three sixes to give some respectability to the Kiwi total.

Except for Sehwag, no other batsmen was able to find the measure of the pitch with as many as 15 falling in single digit scores.

India picked the right team by including four pacers, but in the end it was Sehwag's century that made the difference to the final outcome.