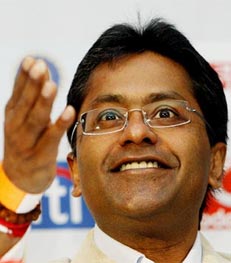 The Board of Control for Cricket in India (BCCI) is set to file a criminal case against suspended Indian Premier League (IPL) chairman Lalit Modi, reports said on Friday.

Modi was suspended after IPL-3 concluded, following allegations of financial irregularities in the Twenty20 league. The BCCI has set up a disciplinary committee to probe charges of irregularities by Modi, who has so far stayed away from the hearings citing security reasons and threat to his life from the underworld.

The case will be filed in Chennai, where BCCI has its registered office, for alleged violations of the Foreign Exchange Management Act, the Economic Times reported.

The report quoted an anonymous board official as saying that the BCCI has found evidence of FEMA violations relating to the Rs 125 crore 'facilitation fee' that was paid by IPL broadcaster Multi Screen Media to sports marketing agency World Sport Group (Mauritius).

However, Modi's general counsel Mahmood Abdi said he was not aware of any such move and warned the board against undertaking such a move.

"I have no clue about this, and if they do it, they are doing it to deflect attention from the secretary and treasurer of the board, who are in a tight spot before the investigating agencies. By doing so, they will further erode the purpose and credibility of the disciplinary proceedings currently underway," he told the paper.

In April, the BCCI had pointed out the five main charges against Modi, which included rigging of bids during the initial bidding process.