England completed a crushing innings and 225 run victory over Pakistan in the fourth and final test at Lord's on Sunday on a morning overshadowed by corruption allegations. 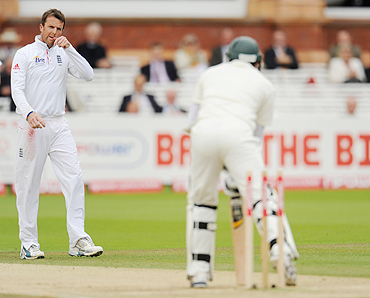 Police arrested a 35-year-old man on Saturday after a British newspaper said Pakistan players had been involved in spot fixing, the illegal practice of manipulating incidents within the course of the match.

In an innings in keeping with an unusual game, Umar Akmal smashed 79 not out from 68 balls including two sixes in a total of 147.

He shared a last-wicket partnership of 50 with Mohammad Asif, who contributed only one, but still could not prevent Pakistan tumbling to the biggest test defeat.

England won the series 3-1 after dominating the first two tests before they were defeated by four wickets in the third match at the Oval. Pakistan, who played six tests in seven weeks, drew 1-1 with Australia earlier in the season.

Pakistan resumed at 41 for four in their second innings before a scattering of spectators on a dull, overcast day.

They left their north London hotel late on Sunday morning and did not take part in the usual team warm-up before play began.

Off-spinner Graeme Swann, who took four for 12 in Pakistan's first innings of 74, was again the destroyer with five for 62.

Swann bowled Azhar Ali for 12 and Mohammad Amir for a duck as three wickets fell in the space of 11 balls.

Wahab Riaz was caught by Kevin Pietersen at mid-on off Swann without scoring before Akmal flourished with a frenetic innings including a huge six over long-on in his first half-century of the series.

Stuart Broad, who scored 169 in a world-record eighth-wicket stand of 332 with Jonathan Trott (184) on Saturday, was named as England's man-of-the-match.

Amir, 18, became the youngest bowler to reach 50 test wickets when he captured six for 84 in England's first innings.

However, he was one of the players named in the newspaper article and on Sunday tour manager Yawar Saeed said he had been questioned by police and his phone had been confiscated.

"I don't think anyone wants to finish a Test series in this scenario," said England captain Andrew Strauss.

"It has taken the gloss off the series win which is very disappointing because we had some outstanding performances.

"The partnership by Trott and Broad is the best I've seen in an England team and we followed it up with our bowling.

"It's been a hard-fought series and it's nice to win it but not in these circumstances."

© Copyright 2020 Reuters Limited. All rights reserved. Republication or redistribution of Reuters content, including by framing or similar means, is expressly prohibited without the prior written consent of Reuters. Reuters shall not be liable for any errors or delays in the content, or for any actions taken in reliance thereon.
Related News: Jonathan Trott, Scorecard England, Pakistan, Mohammad Amir, Umar Akmal
SHARE THIS STORYCOMMENT
Print this article