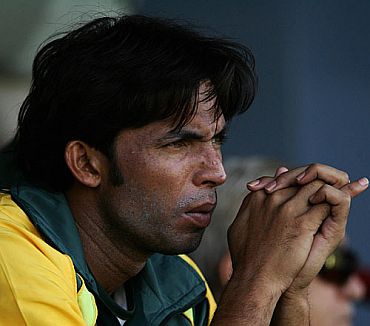 Popular Pakistani actress and cricketer Muhammad Asif's former girlfriend, Veena Malik, has added to the woes of the embattled pacer by claiming that she has proof of his involvement in spot-fixing and that he has been in touch with bookmakers in the recent past.

Veena, who had a much publicised break up with Asif earlier this year, said on a television that Asif used to be in touch with an Indian bookmaker named Dikshit, who paid him for spot-fixing in matches.

"Asif used to call up this Indian bookmaker and other bookies as well on the phone of his servant. I have evidence of the messages he exchanged with the bookies," she said as she waved around a paper having a list of messages.

Malik broke up with Asif after the latter married as per his parents' wishes.

Veena had filed a court case against Asif for recovery of some Rs 13 million earlier this year after their break-up, with the cricketer denying he owed her anything.

After an ugly exchange of allegations in the media, both reached a settlement on the intervention of a mutual friend.

Veena said Asif had told her that Pakistan would not win any Test series until 2010 and that good money was to be earned from spot fixing without affecting results of the matches.

"I have more evidence of his involvement and I can show that he and some other players also indulged in spot fixing on the Australian tour," she said.

Malik also alleged that Asif had paid bribes to escape a longer suspension when he tested positive in a dope test during the Indian Premier League two years back.