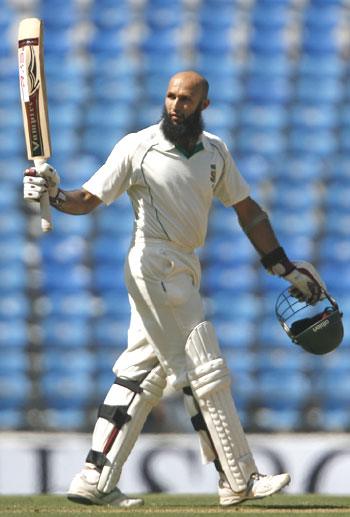 India made a blazing start in response to South Africa's mammoth first innings total of 558 for six declared on day two of the first Test in Nagpur on Sunday.

When stumps were drawn for the day, the home side had scored 25 for no loss off just four overs, with Virender Sehwag (9) giving a glimpse of what can be expected on Monday morning. Giving him company was Gautam Gambhir, on 12.

The visitors eventually declared with 26 minutes of play remaining in the final session. That allowed the hosts four overs to bat before close.

Having batted 176 overs, South Africa had Hashim Amla unbeaten on a magnificent 253 with Dale Steyn, who was yet to open his account, when captain Graeme Smith decided it was time to give his bowlers an outside chance to get a wicket.

But considering the manner in which the Proteas had paced their innings -- a run rate of 3.17 in almost two days is self explanatory -- the time their bowlers eventual got was never going to be enough to make an impact, unless fortune favoured.

The South African innings was bolstered by a record 340-run partnership for the third wicket between Amla and Jacques Kallis (173), which laid the foundation of the mammoth total they eventually achieved.

This is Amla's highest score in Test cricket, surpassing his previous best of an unbeaten 176 he achieved against New Zealand at the Wanderers in 2007.

He also became only the second South African batsman to score a double hundred against India -- after De Villiers had managed the feat (217 not out) at Motera during their last tour.

Resuming at their overnight score of 291 for two, the visitors added only a single run to their total in the first three overs.

Then Amla, who had shown an aggressive intent in the final session of the opening day, cut loose, hitting three boundaries off Zaheer.

Ishant wasn't spared either. In his fifth over of the day, Amla helped himself with another boundary courtesy a pull, and three balls later, Kallis got off the blocks with a boundary past point.

Harbhajan was introduced in the 11th over of the day and in his first over he achieved something that he had failed to achieve all through the opening day -- a maiden.

Soon Amla reached 150 with a single of Harbhajan. India's fielding woes continued as Murali Vijay failed to hold on to yet another chance at leg slip.

It was the third time in his career that the 26-year-old had surpassed the 150-run mark and the second time against India -- after his 159 at Chennai in 2008.

The Amla-Kallis partnership (340 runs off 646 balls), a record for the third wicket in India, was threatening to take the game away from the hosts when Harbhajan finally struck giving India the much-needed breakthrough.

The offie had Kallis caught by Vijay at short leg. It was Harbhajan's first wicket of the innings and reduced South Africa to 346 for three.

Kallis made 173, his 351-ball knock inclusive of 15 hits to the fence and two over it. However, he missed out on a maiden Test double hundred yet again.

For a batsman of his stature, with 34 Test hundreds, Kallis unfortunately hasn't been able to convert those tons into a double thus far.

Amla and De Villiers ensured there was no further damage going into the break.

In the opening session on day two, 42 runs were scored off 14 overs in the first hour and 46 runs off 18 in the second.

At lunch, the visitors were comfortably placed at 379 for three (after 123 overs).

Amla completed a well-deserved double hundred, De Villiers made a calculated half century and their 108-run partnership for the fourth wicket increased India's worries in the second session of play.

Amla completed his double with a boundary off Sehwag.

De Villiers also completed his 21st Test half century, with a single off Sehwag. It was his first fifty against India though he has a 217 not out to his credit (at Motera).

The first hour after lunch yielded the visitors 68 runs in 16 overs, the best in terms of run rate in the match.

But Sehwag eventually induced a leading edge of De Villiers's blade and Badrinath made no mistake at backward point. South Africa 454 for four.

In came JP Duminy (9), but he failed to make much of an impression.

The left-hander mistimed a sweep and was given out leg before, to give Harbhajan his second wicket of the match. South Africa 476 for five.

The final session of the second day's play didn't start the way it was expected to. The South Africans, despite their advantageous position, did not seem keen on accelerating their scoring rate.

Instead, their batsmen were happy to keep the scoreboard ticking by nudging the ball around for singles and waiting for a poor delivery to hit that occasional boundary.

Amla and Boucher though ensured South Africa consolidated their advantage further and crossed the 500-run mark.

In the fifth hour of the day 62 runs were scored in 18 overs. And there was no hint of a declaration.

Boucher (39) top-edged a Zaheer Khan delivery to Amit Mishra at covers to ensure India a stray (and what would be their final) success.

It was Zaheer's third wicket of the innings.

However, before his dismissal Boucher put on 78 runs for the sixth wicket with Amla to compound India's woes.

The declaration happened soon after.

No rift between Sehwag and Dhoni: Harbhajan