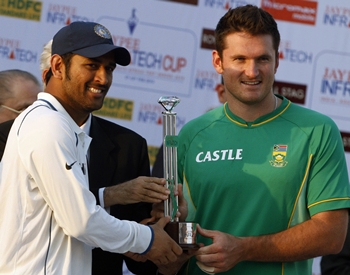 India thwarted stubborn resistance from South Africa's Hashim Amla and the tailenders to clinch a series-levelling innings and 57 runs victory in the second Test at Kolkata to retain their status as the number one team on Thursday.

The home team was in serious danger of losing the top spot after South Africa won the Nagpur Test last week and then bad weather on Wednesday allowed only 31 overs of play.

However, Harbhajan Singh took five for 59 and Amit Mishra bagged three for 78 as South Africa was bowled out for 290 despite a fighting 123 not out by Hashim Amla.