It's been a great season for Team India: Kirsten 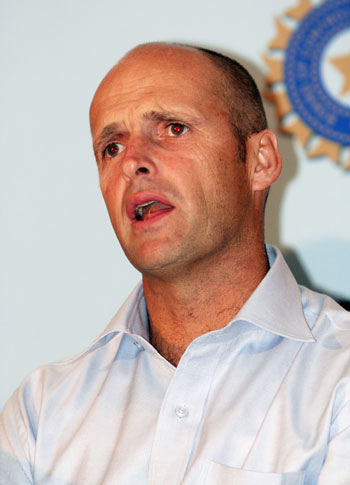 "I am very satisfied," declared Gary Kirsten, with a sigh of relief, a day ahead of the third and final One-day International between India and South Africa at the Sardar Patel Stadium in Motera.

With the series already in the home team's kitty, their coach could afford to sit back a bit and reflect on the season gone by. But before you could remind him there is still a match to go before the season formally ends, the South African came up with a rejoinder.

"We will be taking this game very seriously," he explained.

"I won't divulge the final eleven, but there'll be opportunities. We'll try to pick the best combination that can win the game for us," he added.

Having said that, Kirsten reverted to assess his team's performance during the season gone by.

"It has been a great season for Team India. We can be proud of our performances," he asserted.

"The guys have responded well when they were needed to and have handled the pressure moments well.

"We've had some disappointments for sure, but the season in general has been a success.

The No 1 ranking in Tests and the No 2 ranking in ODIs proves that," he added.

Kirsten admitted his team is keen to end the season on a winning note at Motera and will be relying on youngsters to do the job -- as many of the senior players have been rested for the game.

"It feels good to have so many youngsters in the team. They bring in so much freshness and energy," he explained.

The South African, however, rued the fact that the youngsters are yet to get enough opportunities thus far.

"It s sometimes sad when they [the youngsters] get to play in only one game every now and then," admitted the coach.

"But it is for them to use that opportunity and move ahead. Everyone of us has gone through that phase," he added.

Kirsten, predictably though, stopped short of declaring the names that will fill in for the senior counterparts at Motera.

"It is important for Indian cricket that there's competition for places. That's exciting and you want that to happen," he said.

But he did confirm one certainty for the match.

"Sudeep Tyagi is playing in the match tomorrow," he revealed. "He got two games in Bangladesh and tomorrow he gets another opportunity to prove his worth."

With just a match to go before the season gets over, the South African is already looking to the season ahead and the first major assignment at the T20 World Cup in the West Indies.

"As a coach your job never ends," he explained.

"I'll take a few days off during the IPL, but will stay in touch with the team nonetheless.

"We have got to do some work on our T20 game. We haven't done well in that form of the game in the last year or so," he signed off, the caution in his words apparent.