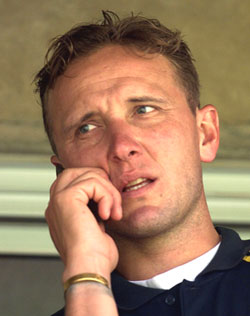 Donald said he will consider taking up the job if approached but dismissed reports that he has already accepted such an offer.

Donald's name has surfaced as possible successor for Prasad, who was ousted in October last year after India's disastrous Champions Trophy campaign.

"A guy would be stupid not to think about (becoming India's bowling coach) - I will definitely be interested if they talk to me," Donald told the Afrikaans daily Beeld on Wednesday.

If he gets the job, Donald would join his compatriot Gary Kirsten, who is currently India's coach.

Donald has previously coached the English side during the inaugural Twenty20 world championships in South Africa in 2007.