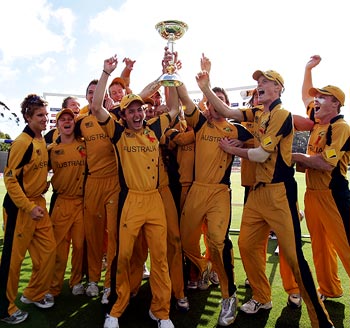 Australia Under-19 beat Pakistan by 25 runs to win the ICC Under-19 World Cup at the Bert Sutcliffe Oval just outside Christchurch in New Zealand, on Saturday.

Australia lost the toss and was sent in to bat but quickly found early trouble before a middle and lower-order revival helped them to 207 for nine from their 50 overs before knocking over Pakistan for 182 in 46.4 overs.

This was Australia's third ICC Under-19 World Cup win, after taking home the trophy at the inaugural event in 1988, as well as in 2002, coincidentally also played at the Bert Sutcliffe Oval and captain Mitch Marsh said the win felt unbelievable.

"To tell you the truth it feels absolutely amazing; to defend 200 was a great effort from our bowlers with their batting line-up," Marsh said after the match.

"We knew if we took early wickets the pressure would be right back on them, unfortunately we didn't get those early wickets today but one of the things we had written up on the board in the rooms was belief and we never stopped believing today."

Even though he lost the toss Marsh was happy to bat first on a wicket that had widely been considered a 'bowl-first pitch'.

"We knew that having runs on the board in these sorts of matches is pivotal and in the end the pressure might have got to the Pakistanis and credit to our bowlers, they bowled beautifully," the West Australian said.

"We thought that we could always back ourselves to defend totals and it worked for us and I think instilling that confidence in our batsman to tough it out for those first 15 overs was a key for us."

However, it was Pakistan's quicks who did the early damage as Australia lost Maddinson, Beaton and Marsh early, slipping to 23 for three.

Alex Keath (25) and Jason Floros (35) got things back on track before a mix-up saw Floros tragically run-out when looking in pretty good touch.

Tim Armstrong (37) then worked with Keath until he also departed leaving Australia precariously placed at 82 for five and when wicketkeeper Tom Triffitt went out for 21 the score was 128 for six.

Coming in at number eight, Kane Richardson aggressively went about resurrecting the innings, scoring a brisk 44 from as many balls in a knock that contained three fours and two sixes as the pair put on a 61-run partnership.

In reply, Pakistan lost Ahsan Ali early in the chase when he was caught at second-slip off a rising delivery from Josh Hazelwood with the score on 15 and the big quick from Tamworth didn't stop there as he finished with 30 for four from 8.1 overs in a Man of the Match performance.

After falling to 15 for one, Pakistan mounted a fight-back until the left-arm orthodox spin of Luke Doran entered the attack and immediately struck twice as he finished with 32 for three from his 10 tidy overs and it was a turning point in the match not lost on the skipper.

"He's a very smart person who thinks about his fields and his bowling and it was a great effort from him after missing those first couple of games and for him to come back the way he has is excellent; I couldn't be more happy for him," Marsh said.

Although Pakistan got off to a solid start, Marsh was very happy with the way his team toughed out the result.

"In our first couple of warm-up games I think we were pretty sloppy in the field as a team but that was one of our goals to be one of the best fielding sides and to reach the final and have a good day is just amazing," the 18-year-old said.

With some close finishes in the final matches, Marsh paid tribute to the fantastic support the team's received both at the ground from fans and messages from abroad.

"Our supporters have been fantastic for us and I think in some games they have definitely helped get us over the line with their support and we're very grateful for that," he said.

Australia, Pak to clash in U-19 World Cup final