The loss in Zimbabwe was disappointing, but the Asia Cup victory has restored confidence. India (57.86) continue to be ranked second in the Rediff ODI Rankings, just behind Australia (72.72).

Australia have themselves been stunned by England, but they've done enough in 2009 (remember they won the Champions Trophy) to stay on top of the list.

Table A shows the current rankings.

South Africa (50.98) fail to gain after their 5-0 win against West Indies (27.04) because it doesn't take much to defeat West Indies these days.

England (50.15) and Zimbabwe (17.49) have however gained impressively by defeating their higher-ranked opponents: respectively, Australia and India.

Sri Lanka (49.86) too have gained after a few good wins against India, but they would've zoomed upwards if they had won the big Asia Cup final.

The Rediff ODI rating is a judicious combination of every team's weighted index (WI) and tournament index (TI).

The WI, based on recent ODI encounters between every pair of teams as shown in Table B, is essentially a weighted average that considers the 'opposition strength' (because wins against strong opponents must be rewarded more) and the 'home-away-neutral' factors (because teams usually win more at home, and lose more playing 'away').

The TI factors in a team's performance in tournaments and series (and thereby seeks to better reward wins in 'big' matches). The TI is currently based on a time window spanning the last 12-13 months, i.e. June 2009 to June 2010. 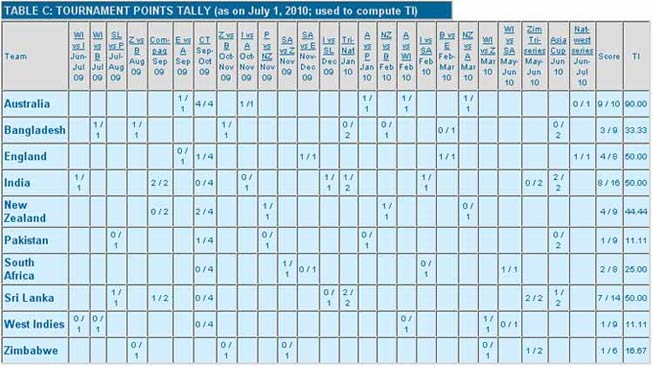 Our next update will appear after the England-Bangladesh NatWest series and, inevitably, another tri-series featuring India and Sri Lanka -- this time with New Zealand!