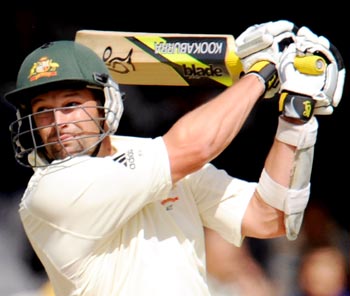 Pakistan face a 13th consecutive defeat against Australia in the first Test at Lord's after they were set a world record 440 to win on the third day on Thursday.

At the close of a day in which the sun shone consistently for the first time in the match, Pakistan were 114 for one in their second innings with vice-captain Salman Butt on 58.

An Australian victory during the remaining two days would break the record they share with Sri Lanka, who have defeated Bangladesh 12 times in a row.

Pakistan needed quick wickets to have any chance of a win when play resumed with Australia 100 for four in their second innings, an overall lead of 205.

Instead nightwatchman Mitchell Johnson stroked a handsome 30 and Ben Hilfenhaus recorded his highest first class score of 56 not out.

Last man Doug Bollinger, whose previous best Test score was nine, made 21 in a lively 10th-wicket partnership of 52 with Hilfenhaus.

Debutant wicketkeeper Tim Paine, playing in place of the injured Brad Haddin, weighed in with an enterprising 47 after another feat of monumental concentration from opener Simon Katich.

Katich followed his first innings 80, scored when the Pakistan pace attack were at their most threatening with overcast conditions and moisture in the air, with 83 in exactly four hours.

He played scarcely a memorable shot, apart from a late dab through the slips which may have been premeditated, but his concentration, patience and application have held the Australian batting together and he has now scored half-centuries in each of his last nine Tests.

Two wickets in three balls immediately after lunch briefly raised Pakistan's hopes but as the sun began to shine and the ball stopped swinging they were unable to stem the flow of runs.

Hilfenhaus, with a previous highest first class score of 50, even slashed Mohammad Asif over point for six, and Bollinger was similarly untroubled.

Butt, the only Pakistan batsman to come to terms with conditions in the first innings with a well-crafted 63, relished the sun and an increasingly benign pitch when Pakistan began their second innings. He drove deftly and ran swiftly to reach his 10th Test half-century with nine fours.

Leg-spinner Steven Smith was finally thrown the ball in his debut Test and was gifted his first wicket when Imran Farhat (24) pulled a long hop straight to Shane Watson at mid-wicket.

© Copyright 2022 Reuters Limited. All rights reserved. Republication or redistribution of Reuters content, including by framing or similar means, is expressly prohibited without the prior written consent of Reuters. Reuters shall not be liable for any errors or delays in the content, or for any actions taken in reliance thereon.
Related News: Scorecard Pakistan, Ben Hilfenhaus, Simon Katich, Doug Bollinger, Australia
COMMENT
Print this article