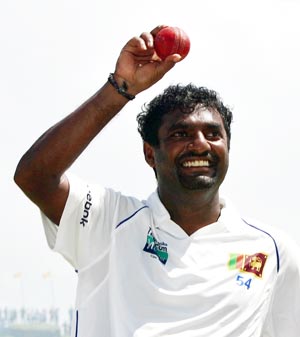 Muttiah Muralitharan signed off with 800 wickets as Sri Lanka beat India by ten wickets on the fifth and final day of the first Test, in Galle, on Thursday.

Tillakaratne Dilshan slammed a quickfire 68 from 47 balls to finish off things with a six, and Tharanga Paranavitana was unbeaten on 23, as Sri Lanka raced to 96 for no loss in their second innings, from 14.1 overs, to take a 1-0 lead in the three-match series.

Earlier, Muralitharan ended his career on a high when he dismissed Pragyan Ojha to breach the 800-wicket mark in Test cricket.

Playing his final Test, he had Ojha caught at first slip for 13 to reach the landmark. Ishant Sharma stayed unbeaten after a dogged knock of 31 from 106 balls as India were bowled out for 338 in 115.4 overs, setting Sri Lanka a target of 95 for victory.

Playing his 133rd Test, the 38-year-old Murali now boasts of an amazing tally of 800 wickets, at an average of 22.72, with 67 five-wicket hauls and 22 10-wicket hauls. Former Australia leg-spinner Shane Warne is a distant second with 708 wickets while former India leggie Anil Kumble is third, with 619 wickets.

Muralitharan took three for 128 in the second innings for wonderful match figures of eight for 191. Lasith Malinga was the other star performer with the ball, claiming two for 55 and five for 50 respectively.

VVS Laxman toiled hard on the final day before he was run-out after scoring 69 from 128 balls; he added 68 runs for the ninth wicket with Ishant.

Malinga started the rot when he claimed the first wicket of the final day, bowling Mahendra Singh Dhoni for four with a fast reverse swinging yorker.

Muralitharan then trapped Harbhajan Singh leg before wicket to claim his 799th wicket and bring Sri Lanka closer to a crushing victory. Mithun batted with confidence, scoring 25 from 59 balls, and hitting Muralitharan for four boundaries, before he was trapped leg before wicket by Malinga, who took five for 48.

Muralitharan, playing his final Test, had taken five for 63 as India were bundled out for 276 in their first innings, conceding a huge first innings lead of 244 runs, Sri Lanka having amassed 520 for eight declared.

Sehwag slammed his 20th Test century in a splendid 109 in the first innings, and Sachin Tendulkar scored 84 in the second, but the rest of the Indian batsmen failed to come to the party.

It turned out to be a perfect start for Sri Lanka, with Malinga striking in the second over of the day.

Dhoni (4) was beaten all ends up by a fast swinging yorker from Malinga that swung late and crashed into his stumps.

Muralitharan then claimed his 799th wicket when he trapped Harbhajan Singh leg before for eight as India were reduced to 179 for seven in 64 overs.

Debutant Mithun showed why he deserved the promotion to number nine. He cut a short delivery from Muralitharan through point and then played the final delivery of the 70th over fine for two boundaries.

He repeated the dose again on Muralitharan with two more boundaries in his next over. First, he danced down the wicket to the Sri Lankan spin wizard and lofted him down the ground, and a few deliveries later produced a cracking cover drive for his fourth boundary.

Laxman got his first boundary of the day when he pulled a short delivery from Tillakaratne Dilshan through the midwicket region.

India avoided the humiliation of an innings defeat when their score crossed 245 for seven, yet there was no way they could save the match from this position.

Mithun, who looked comfortable against the spinners, came undone against Malinga's pace. The speedster got him plumb leg before with a fast reverse swinging yorker after a good knock of 25 from 59 balls.

With two wickets remaining it was interesting to see whether Malinga would go in for the kill or leave Muralitharan a chance to get that elusive 800th wicket from the other end.

With India on 253 for eight in 85 overs, Sri Lanka took the second new ball and straight away gave it to Muralitharan.

The spin wizard nearly had his 800th victim but had a huge leg before wicket appeal turned down against Laxman in the 88th over, much to the frustration of the entire stadium.

Laxman brought up his half-century from 101 balls with a single on the leg-side against Muralitharan in the 90th over.

Even Ishant Sharma grew in confidence, driving Muralitharan and Herath through cover for a boundary in successive overs.

Laxman showed great application to score 58 from 117 balls, while Ishant contributed with 18 from 39 balls as the two batsmen added 46 runs for the ninth wicket to delay Sri Lanka's victory charge.

Playing his final day in Test cricket, Muralitharan was felicitated by Sri Lankan President Mahinda Rajapaksa before taking the field after the lunch interval.

Chanaka Welegedara came on to bowl for the first time in the day, with Muralitharan operating from the other end. Ishant guided Welegedara wide off the slips for a boundary to take India past the 300-run mark in the 98th over.

Laxman seemed in complete control as he hit Welegedara down the ground for a delightful boundary.

But, once again, Sri Lanka got the wicket when it really mattered. Laxman went for a quick single but was caught short by a direct hit from Mathews after a fine innings of 69 from 127 balls.

The right-hander helped India reduce the margin of defeat as he added 68 runs in 18.5 overs for the ninth wicket with Ishant.

Ishant and Ojha batted for nearly 15 overs without a boundary before the latter broke the shackles as he lofted Muralitharan over mid-off for his first boundary off the 48th ball he faced.

But Ojha's joy was shortlived as a couple of deliveries later he was dismissed. That dismissal secured Murali another slot in the history books.

Ojha became Muralitharan's 800th Test victim when he was caught in the slips after scoring 13. The entire stadium erupted in unison to celebrate their champion spinner's wonderful feat.

In his final Test, Muralitharan signed off with splendid figures of eight for 191, including the five-wicket haul in the first innings.

The 38-year-old had to toil to earn that final wicket of Ojha. He bowled 23.4 overs to get that final breakthrough, dishing out all the varations in his armoury while switching ends at regular intervals.

The Indian tailenders showed great resolve as they made Sri Lanka earn their wickets with good sensible batting. The last two Indian wickets lasted 314 deliveries between the batsmen as they tried their level best to delay the inevitable.

Mithun got into the act straightaway as he got Tharanga Paranavitana to glove a short rising delivery which flew over the slips for a boundary in the first over.

Tillakaratne Dilshan came out attacking, hoping to finish off things before rain or any other divine intervention. He went after Mithun in the third over, cracking him through the covers and midwicket respectively, for back-to-back boundaries.

Ishant Sharma also came in for some punishment as Paranavitana crashed him through the cover region twice in the eighth over.

At tea, Sri Lanka were in sight of a crushing victory, as they coasted to 63 for no loss in seven overs, with Dilshan on 37 from 29 balls and Paranavitana on 21 from 29 balls.

Harbhajan's nightmare continued, as Dilshan took him to the cleaners in his first over. He slog-swept him twice through the midwicket region for another couple of boundaries to race to fifty from just 37 balls, inclusive of five boundaries.

The off-spinner had gone wicketless in the first innings, bowling 30 listless overs, as he struggled with fitness issues. In the second too he came under the attack straightaway, as the Indians seemed to be going through the motions with the ball.

Dilshan finished off things in style when he charged down the wicket and deposited Harbhajan down the ground for a six.

Sri Lanka cruised to 96 for no loss in 14.1 overs and win by a convincing ten-wicket margin.

Dilshan provided the boost as he slammed 68 from 47 balls, laced with six boundaries and a six, while Paranavitana remained unbeaten on 23 from 42 balls.

For the third tour in a row, India had lost the first Test match of the series. The Indian pacers, Mithun and Ishant, did well in the first innings but both the spinners disappointed big time.

But this first Test will always be remembered for Muralitharan's splendid feat.

It must be remembered that India were defeated despite a full day's play and nearly a session being washed out by rain.

In sum, Sri Lanka owe it to Muralitharan's brilliant bowling.