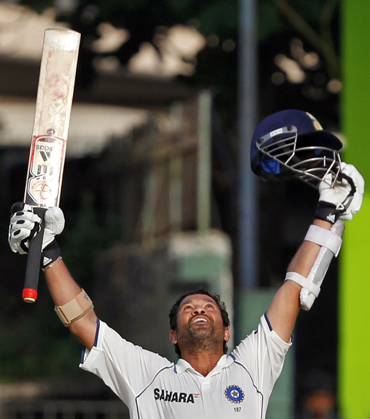 Statistical highlights of the third day's play in the second Test between India and Sri Lanka, in Colombo, on Wednesday.

# Murali Vijay and Virender Sehwag put on an opening stand of 165 -- India's third best for the first wicket against Sri Lanka in Sri Lanka, next only to the 171 between Manoj Prabhakar and Navjot Singh Sidhu at Colombo, SSC in 1993 and 167 between Gautam Gambhir and Sehwag at Galle in 2008.

# Since recording a career-best 87 against Sri Lanka at Mumbai's Brabourne Stadium in 2009-10, Murali Vijay has posted his highest score (58).

# Murali has posted both his Test fifties against Sri Lanka.

# Murali and Sehwag have averaged 150.00 for the first wicket -- the highest by an opening pair with 500 runs or more for India. Their aggregate of 600 includes three century partnerships and one ninety-plus.

# Suresh Raina's unbeaten knock of 66 on his Test debut was largely instrumental in an unbroken 141-run stand for the fifth wicket with Sachin Tendulkar.

# Tendulkar's tally of 76 century stands has been bettered only by Rahul Dravid (82) and Ricky Ponting (78).

# With his century partnership, Tendulkar has set a record for most century stands (12) against Sri Lanka, surpassing Pakistan's Younis Khan's tally of 11.

# Tendulkar has become the first batsman to aggregate 600 runs against Sri Lanka at Colombo, SSC -- 603 runs at an average of 100.50 in five Tests, including four centuries and one fifty.

# With his superb unbeaten 108 off 181 balls, Tendulkar has regained his record for the highest run-aggregate in India-Sri Lanka Tests, amassing 1805 at an average of 60.16 in 24 Tests, including nine centuries and five fifties.

# Tendulkar's run-aggregate is the highest by any batsman against Sri Lanka. He has overtaken Mahela Jayawardene's tally of 1756 (ave.73.16) in 17 Tests.

# His aggregate includes five hundreds and one fifty. His centuries' tally is the highest this year.

# VVS Laxman and Tendulkar have shared a fourth wicket partnership of 68 -- India's highest at Colombo, SSC.

# Tendulkar's tally of 48 hundreds, including 27 on foreign soil, are both records in Tests.

# Sehwag became only the third player to be dismissed on 99 in Tests -- the first two were Pakistan's Maqsood Ahmed against India at Lahore in January/February 1955 and New Zealand's John Wright against England at Christchurch in January 1992.