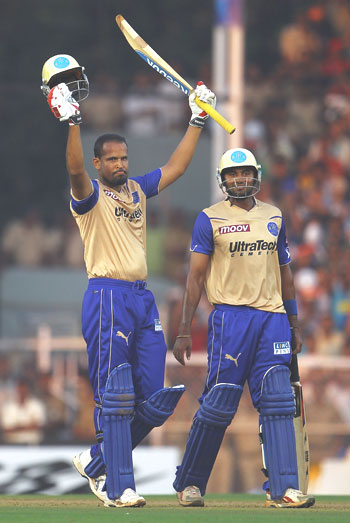 If the opening match of the Indian Premier League III was nail-biting, then the second was simply about Yusuf Pathan.

The dashing India all-rounder played best the innings of the Indian Premier League so far as he smashed a mind-boggling 37-ball century against the Mumbai Indians on Saturday.

But despite registering the fastest century of the IPL, Rajasthan Royals went down to Mumbai Indians by a narrow margin of four runs at the Brabourne Stadium in Mumbai.

Pathan was one of the finds of the first edition of the IPL, but he hadn't really been able to live up to his big-hitting reputation since then.

But on Saturday, when all looked lost for the Rajasthan Royals, chasing an improbable 213 for victory, the right-hander came to the party and almost took the game away from Mumbai Indians.

Pathan's 100 came off just 37 deliveries, bettering the record of Deccan Chargers' captain Adam Gilchrist, who scored 100 in 42 balls against the same opposition in the inaugural season.

The Royals got off to a worst possible start, losing Swapnil Asnodkar in the first over of the match.

Graeme Smith and wicketkeeper Naman Ojha did steady the innings, but with the innings run-rate steadily climbing, they faltered and Royals slumped to 66 for four in ten overs.

In came Yusuf and took little time to settle in. He slammed left-arm spinner Ali Murtaza for a hat-trick of sixes. Medium pacer Satish was the next casualty as Pathan smashed him for three boundaries and two huge sixes to amass 26 runs from the over.

In the process, the dashing batsman brought up his half-century from a mere 21 deliveries, having hit six sixes and two boundaries.

Mumbai Indians skipper Sachin Tendulkar tried every option but nothing could stop Pathan. Sanath Jayasuriya was introduced to bowl his flat left-arm spinners, but the move backfired as Pathan took him to the cleaners.

He slammed him for a huge six over mid-wicket and then edged one through third man for a boundary. Off the next delivery he dismissed one into the long-on boundary to bring up his century in some style.

Pathan's innings came to an end when he was brilliantly run-out by R Satish off his own bowling. The batsman walked back to the pavilion to a standing ovation. His knock will be remembered for a long, long time.