Praveen Kumar took the tournament's first hat-trick to vindicate Royal Challengers Bangalore's decision to field first and put them on course for a big win against Rajasthan Royals in their Indian Premier League match at the Chinnaswamy Stadium on Thursday. 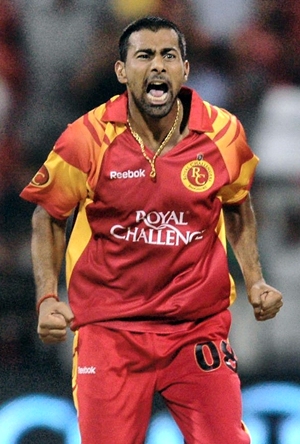 The home team cruised to a comprehensive 10-wicket win over the visitors, with a whopping 57 balls remaining.

It was the second biggest win in terms of balls left -- coming only next to Mumbai Indians' win over Kolkata Knight Riders (with 87 balls left) in the inaugural edition.

Chasing just 93 to win, Bangalore reached their target with ease, Jacques Kallis remaining unbeaten on 44; giving him company was Manish Pandey on 42.

Both batsmen had seven hits to the fence each, the latter helping himself with one over it as well.

It was the second straight win for Royal Challengers, having dropped their opening match against Kolkata Knight Riders.

It was also the Bangalore team's second win over Rajasthan in five IPL matches.

Rajasthan Royals, on the other hand, suffered their third straight defeat.

Having dismissed Rajasthan for a paltry total, the team from Bangalore began in an emphatic manner, Pandey hitting Munaf Patel's first ball over midwicket for the first boundary.

Three balls later, there was an encore.

Kallis, the incumbent holder of the Orange Cap as the tournament's top scorer (with 200 runs in three games), hit the four boundaries in the second over (off Morne Morkel) -- an over that cost Rajasthan 20 runs.

The South African veteran is yet to be dismissed in the tournament.

The duo continued in the same manner, taking 59 runs off the first six overs.

The ninth over, the final one before the strategic time-out, bowled by debutant Narwal cost Rajasthan another 18.

And going into the breather, Bangalore required just eight runs with 11 overs left.

And it took them 10 more balls to complete the rout.

Earlier, the Bangalore bowlers pestered the Rajasthan batsmen with short-pitched balls on a regular basis and never allowed them to get into any rhythm.

The fact that the Rajasthan innings witnessed just five boundaries and two sixes is ample testimony to the suffering of their batsmen and the stranglehold the Bangalore bowlers had over them.

The visitors started on a cautious note, with both their openers trying to rotate strike than go for the big shots.

Michael Lumb (10), the South African who plays for Hampshire, began with a boundary (off Praveen Kumar), albeit a tentative shot that went through the vacant second slip position.

The Rajasthan openers got just 20 runs in their first four overs.

When R Vinay Kumar was introduced into the attack in the fifth over, Naman Ojha (16) welcomed him with a boundary to the square-leg fence.

But any hopes of Rajasthan breaking free soon dissipated as Ojha was dismissed by Kallis in the next over, caught at covers by Robin Uthappa.

And, in the next over, Kumble foxed Lumb with a wrong 'un and Mark Boucher made an easy stumping.

Abhishek Jhunjhunwala (5) survived a loud appeal off the third ball, smashed the fourth to the point boundary and chopped the fifth onto his stumps.

After 10 overs, Rajasthan had made 45 for three, the lowest total at that stage in the competition.

Yusuf Pathan (26) eased the woes a bit by hitting successive sixes off Vinay Kumar, both over long-on, but the Bangalore bowlers seemed to have found a way to contain him otherwise.

He was fortunate when Rahul Dravid dropped him at midwicket off Kallis.

With the Rajasthan scorecard reading 75 for three at the 14-over mark, Warne opted for a strategic time out.

It had a negative impact, as Yusuf was run-out by a Virat Kohli direct hit, soon after resumption.

Damien Martyn (19) has not played international cricket for a while and so it came in as no surprise when he struggled before being cleaned up by Praveen Kumar.

The bowler accounted for Smit Narwal (0), caught by Manish Pandey at fine leg, off the next ball. And then completed his hat-trick by cleaning up Paras Dogra (3).

Kumar's final figures read: 4-01-18-3. It was the sixth hat-trick overall in the competition.

Captain Kumble cleaned up his opposite number Warne (4) with another wrong 'un in the final over.

Morne Morkel (2) was usurped by the Kumble-Bouvcher combine and Munaf Patel (0) was run-out to the penultimate ball.

In failing to bat their stipulated 20 overs, the Rajasthan scorecard made for a miserable reading at 92 all out off 19.5 overs.

It is the lowest score at the venue in this third edition.

Praveen accounted for Martyn, Narwal and Dogra with successive deliveries of his final over - the 17th of the innings - to achieve the landmark.

Captain Anil Kumble, who had released his book Wide Angle a day earlier, used the wroung 'un to a good effect to finish with impressive figures of three for nine.

"We chased well the other day and so we are looking to restrict them to 160-170," reasoned captain Kumble.

"Looks a good wicket and doesn't look it will change much. 200-plus is a par score," concurred Warne.

The Rajasthan squad had as many as four changes to their injury-prone squad.