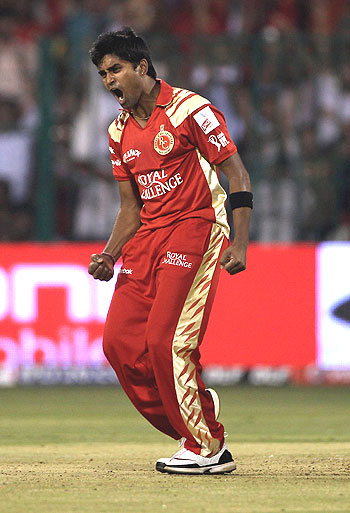 Karnataka pacer Ranganath Vinay Kumar was on Friday rewarded for a consistent domestic performance with a place in India's 15-member squad for Twenty20 World Cup, in the West Indies, next month.

Kumar, who is displaying good form in the ongoing Indian Premier League, is the only new face in the squad, to be led by Mahendra Singh Dhoni.

Pacers Ishant Sharma, S Sreesanth and RP Singh, who were in the provisional 30-member list, failed to figure in the squad, which was picked by the Board of Control for Cricket in India's senior selection panel, under the chairmanship of Krishamachari Srikkanth, in Mumbai.

Besides Vinay Kumar, Zaheer Khan, Ashish Nehra, Praveen Kumar are the pacers in the squad, while Harbhajan Singh and Piyush Chawla will shoulder the spin bowling duties.

Dhoni will have a back-up wicketkeeper in Dinesh Karthik.

Zaheer and Harbhajan are making a return after missing India's last Twenty20 International against Sri Lanka in December last.