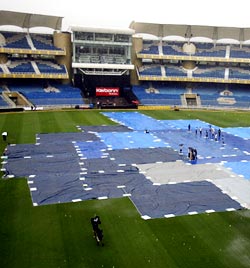 I just heard the Frank Duckworth interview on Cricinfo and one comment particularly caught my attention.

"The scoring patterns in Twenty20 matches fitted in absolutely perfectly with the formula that we'd always used satisfactorily with 50-over games."

Okay, so Duckworth-Lewis (D/L) has no plan to redraw their curves. They are saying that the current curves are just fine and only twice in 70 occasions has there been dissent. And both times from England captain Paul Collingwood!

So there is nothing wrong with D/L, although something might indeed be the matter with a loser named Paul.

It's good of Frank Duckworth to say this because it confirms that we now indeed have a real problem on our hands. The problem is that D/L simply doesn't do the job if the chasing teams have just 5, 6 or 7 overs to bat.

So what exactly is this problem?

The problem (look at the picture below) is that the ten D/L curves (respectively for 0, 1, 2 ... 9 wickets in hand) practically overlap when only 5, 6 or 7 overs remain. You aren't seeing ten different curves distinctly; you are simply seeing one fat conglomerate of these curves. 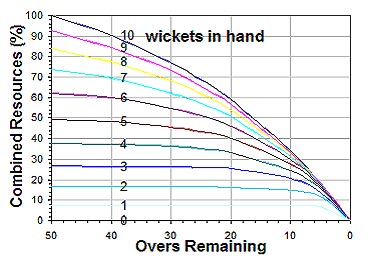 So? Is that a problem?

The D/L target is therefore, for all practical purposes, the target set by the run rate. In the England-West Indies match, England had a run rate of 9.55 and West Indies (who won by scoring 60/2 in 6 overs) were just about required to match England's run rate ... not score significantly faster as you would want and expect given that they had so many wickets in hand.

The real merit of D/L is that it 'punishes' teams that lose wickets by raising the target; lose a wicket and your D/L target goes up! Sadly all this wonderful modelling breaks down when you have these silly 5, 6 or 7 over innings.

In the England-WI match, the hosts only had to score 43/0 in 5 overs or 46/1 in 5 overs to win. So a top wicket is worth just 3 runs in this absurd and frenetic end game!

In fact Duckworth said in that interview that Kieron Pollard being stumped off a wide ball actually helped WI: they gained a run and a ball ... and that was apparently more valuable than losing Pollard! Tell that to Nita Ambani someone.

When matches are reduced to a ridiculously low number of overs, D/L is not designed to do the job. I would have liked to hear Frank Duckworth truthfully tell us that. Surely Frank knows this!

When I look at the curves, say at the 30 overs remaining mark, I see a wonderful (and colourful) spread of those ten curves.

Exactly, and that's the real beauty of D/L! That's when D/L is really doing its job very well. Why even at the 10 overs remaining mark, the 10 curves are sufficiently well spaced out.

What are you getting at?

I'm suggesting that even if we require the team chasing to bat a minimum of 10 overs, D/L will do the job sufficiently well. In fact many readers suggested this option on the Rediff.com message boards.

The problem is that everyone wants a result! When we can accept a draw after five days of Test cricket, why not after a couple of hours of Twenty20?

How then do we solve this problem?

It's a tough one, especially with Duckworth now apparently ruling out a review of his model. That's why I talked of the most productive overs (MPO) model. But, at first sight, it does seem that MPO swings too strongly away from the team chasing. D/L sets an easier-than-fair target and MPO sets a harder-than-fair target --- that's the dilemma!

There was a suggestion on Tuesday to take the average of the D/L and MPO target, but in practice such marriages don't work. It's not a solution, it's more a 'fix'.

A second suggestion -- a MPO variant -- was to look at the total runs scored in the best consecutive sequence of overs. It's an intriguing idea -- and the sort that might appeal to a modeler. But where does it take us? And do we also consider the wickets lost during this sequence?

A large number of solutions involve limiting both runs and wickets for the team chasing. The general idea is: if England score 200 in 20 overs, and West Indies only have 5 overs to play, let them score 50 for the loss of 2.5 wickets  yes, that's the problem! Should that be 2 wickets or 3 wickets? And what if England opened with someone like Andrew Strauss -- because they thought they had 20 overs to bat -- while WI opened with Chris Gayle?

So is there no way out?

Well, we could (should!) check the sort of targets that V Jayadevan's method (VJD method) would set. The VJD method has the advantage of considering field restrictions in the first six overs -- so we should expect it to set targets higher than D/L in the 5, 6 and 7 over games, where we have this serious difficulty with D/L. The VJD method was used in the Indian Cricket League, and performed well.

Otherwise -- and we said this on Tuesday too in these columns -- MPO is still a reasonable alternative. Here is something that I thought of last night. Why not use MPO with the proviso that the first five overs must be bowled by five different bowlers? Every team is trying to hide its fifth bowler, and this fifth bowler usually gets walloped for runs.

To summarize, although MPO sets a very high target in the first five overs, the chasing team has the advantage of (a) 10 wickets, (b) field restrictions and (c) five different bowlers. Add a harder ball into the equation and things seem to fall nicely into place!

The dummy's guide to Duckworth-Lewis