A valiant effort by Ricky Ponting gave Australia a lifeline while making things tough for India on Day 4 of the second Test at the Chinnaswamy Stadium in Bangalore on Tuesday.

For the fourth successive day play was called off early,?with two overs left, because of bad light.

On a fast deteriorating wicket, the Australian second innings collapse was akin to their shoddy show at the same stage in the opening Test at Mohali. But, in this case, it had more to do with the wicket rather than the batsmen.

And with the Australian wickets falling in a canter at one stage, it seemed easy pickings for India. 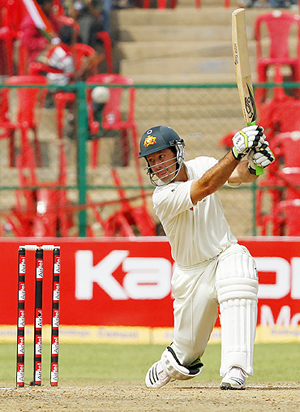 However, Ponting (72) waged a lone battle, playing the captain's role to perfection, his defiance silencing critics who believed he couldn't bat in India.

For the record, he has aggregated 224 runs from his four innings on this tour.

However, the reintroduction of Zaheer Khan into the attack ensured the home team the wicket they so desperately needed. The left-arm seamer caught Australia's captain plumb in front of the wicket.

Ponting's 117-ball knock was inclusive of seven hits to the fence and one over it.

And it was enough to ensure Australia had enough runs to defend come day five.

Pragyan Ojha was India's most successful bowler, with figures of three for 57, while Harbhajan Singh chipped in with two wickets (for 63).

The highlight of the Indian innings was yet another double hundred from Sachin Tendulkar's (214) blade. But his departure followed a familiar collapse of the Indian tail, that witnessed the last five wickets falling for the addition of just nine runs.

The home team was eventually dismissed for 495 in their first essay, having batted for 144.5 overs.

And they have an arduous task ahead of them on the final day.

Tendulkar, beginning the day nine short of a double hundred, began his quest with a sweetly-timed cover drive off Hilfenhaus. Four overs later, he reached the landmark with a single off the same bowler.

It was the Master Blaster's sixth double hundred in Tests, his second against the team from Down Under -- after his 241 not out at Sydney -- and also his second this year, after his 203 against Sri Lanka at the SSC earlier in July.

It also helped him tie with Virender Sehwag for the most double hundreds by an Indian. The legendary Sir Don Bradman holds the overall record with 12.

India took the first innings lead soon after. But a change of bowling did the trick for the visitors, the Master Blaster playing a Peter George delivery onto his stumps to give the debutant his first Test wicket.

George thereby became the third Australian -- after Peter Siddle and Cameron White -- and 10th bowler overall to have Tendulkar as his maiden Test wicket.

Tendulkar's 363-ball innings was inclusive of 22 hits to the fence and two over it. He and Dhoni put on an invaluable 75-run stand for the sixth wicket, one that helped India take the lead.

Zaheer Khan (1) also didn't trouble the scorers much, hitting straight to Clarke at short cover to give George his second wicket.

The introduction of Hauritz ensured the wicket of MS Dhoni, the latter being caught by Clarke at slips. The Indian captain scored an 88-ball 30 that was inclusive of?three boundaries.

And Sreesanth fell two balls later giving the hardworking Hauritz at least something to celebrate.

Earlier, at stumps on day three (after 122 overs), the home team had put up 435 for five, just 43 runs adrift of the Australian first innings total.

Play had been called off because of bad light for the?third successive day with three overs left to be bowled.

Australia made a prudent start to their second innings post-lunch. With the ball starting to reverse, it was all the more palpable.

Shane Watson (31) started the proceedings on a confident note, hitting the fifth delivery of the first over (bowled by Zaheer) left of mid-off for the first boundary of the Australian second innings.

The lead was soon erased and the opening duo batted sensibly putting on a 58-run partnership for the opening wicket with some fine shot-making.

Then the Indian spinners struck thrice in quick time to have them reeling. Ojha dealt the opening blow.

The left-arm spinner trapped the dangerous Watson (31) leg before to give the home side their first breakthrough in the 17th over. In the next over Harbhajan got a similar decision to send Simon Katich (24) back.

From 58 for no loss, the visitors were reduced to 65 for three. Ponting and Hussey ensured there was no further damage before tea.

The Australian batsmen began the final session on a good note, combining caution with aggression to good effect.

Ponting and Michael Hussey (20) put together a 61-run partnership for the fourth wicket to bail Australia out to an extent before the Indian spinners got together their act again.

Ojha struck for a third time, having Hussey leg before to put Australia on the backfoot again, even though?television replays clearly suggested that the ball would have missed the leg.

For Hussey it was again a case of an opportunity gone abegging. The left-hander had starts in all his four innings on this tour, but?failed to convert them in all the four.

Marcus North, who made a Test best 128 in the opening essay, survived only 14 balls in the second. Harbhajan cleaned up him before he could make an impact.

Meanwhile, a leg glance off Harbhajan not only found its way to the fence but also ensured Ponting his 55th Test fifty. It was his ninth fifty against India, his second in the match (after 77 in the first innings) and his third of the series - he scored 71 in the first innings at Mohali.

He?celebrated his landmark by dancing down the track and driving Harbhajan right of mid-off for his second boundary of the over.

When on 61, Ponting aggregated 2,000 Test runs against India.

And in young Tim Paine (23) he had found able support, the duo putting on an invaluable 50 runs for the sixth wicket before Zaheer struck, getting the Aussie captain out leg before.

Paine didn't survive long either, an edge off his blade going straight to Dhoni's gloves and giving a thus far listless Sreesanth his first wicket of the match.

However, Mitchell Johnson (7 not out) and Nathan Hauritz (8 not out) ensured there was no further damage before close of the day's play.