Statistical highlights at the end of the fifth and final day of the second Test between India and Australia in Bangalore, on Wednesday.

# India won all the Tests in a series for the first time against Australia -- their third instance overall, excluding Zimbabwe and Bangladesh.

# After 28 years, Australia lost all the Tests in a series -- the previous instance being against Pakistan in Pakistan in 1982. (all three Tests).

# Australia lost three Tests in a row -- by 3 wickets to Pakistan at Leeds, followed by one wicket at Mohali and by seven wickets at Bangalore -- both to India. The last instance when they lost three successive Tests, was in 1988 -- 22 years ago to the West Indies in Australia. 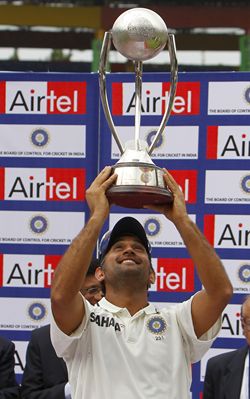 # India registered a victory at the M Chinnaswamy stadium, Bangalore, after 15 years. The last one at the venue was by eight wickets, against New Zealand in 1995.

# India's triumph is their first in five Tests against Australia at Bangalore. This is their fifth victory in 19 Tests at the M Chinnaswamy Stadium, Bangalore (Lost six and drawn eight).

# Mahendra Singh Dhoni became the first Indian captain to register a success rate of 100 per cent against Australia, winning all four.

# Tendulkar, for the second time, recorded a double hundred and a half-century in the same Test match, registering the feats both times against Australia.

# Tendulkar's match-winning knock (214) in the Bangalore Test is his 20th for a winning cause. He is the first Indian player and the fifth in Test cricket to accomplish the feat.

# Pragyan Ojha (3/57) has produced his best bowling figures against Australia. These are his best figures in India.

# Tendulkar was Man-of-the-Match 14 times - the most by an Indian in Tests.

# Cheteshwar Pujara (72 off 89 balls) registered his first half-century in Tests.

# Pujara's brilliant knock is the second best by an Indian debutant in the fourth innings of a Test. Abbas Ali Baig's brilliant 112 against England at Old Trafford, Manchester, in 1959 is the highest ever.

# India became the first team to chase a total of 200 successfully in the fourth innings at Bangalore, bettering the 195 for four by Australia in March 1998.

# Ricky Ponting is yet to post a win against India in India, losing five out of seven Tests played.

# Tendulkar is the leading run-scorer in the series  403 runs at an average of 134.33, including one century and two fifties -- his first instance of amassing 400 runs in a two-Test series.

# Tendulkar has registered his 13th fifty against Australia - his 58th in Test cricket.