I will slap any bookie who approaches me: Harbhajan 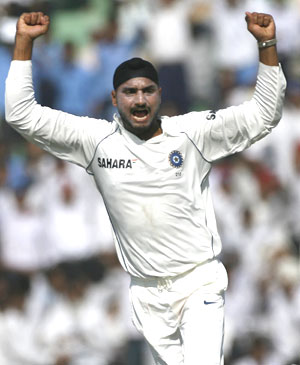 India off-spinner Harbhajan Singh on Sunday said he has never been approached by a bookie in his career and would slap anybody who dares to approach him to fix games.

"I will slap any bookie who will come near me, big time," said Harbhajan when asked what he will do in case a bookie approaches him to fix games.

"I have never been approached by a bookie and I have not also seen these things happen in my career. I never feel that any one can do such things," he told NDTV.

He said it would be a "shame" if the 'spot-fixing' allegations against Pakistan players turned out to be true after the investigations.

"When I play for my country I am very proud of representing my country. I don't know how people can do like this. It is a shame if these things are happening," he said.

Harbhajan said if the allegations are true, harsh punishment should be handed out to the players.

"Well, as Imran Khan has said if these allegations are true there should be punishment to set an example so that it is not repeated. ICC and the (Pakistan) Cricket Board should take necessary steps," said the feisty Indian off-spinner.