News
Business
Movies
Sports
Cricket
Get Ahead
Money Tips
Shopping
Sign in  |  Create a Rediffmail account
Rediff.com  » Sports » IPL to have 74 matches for next three seasons

IPL to have 74 matches for next three seasons 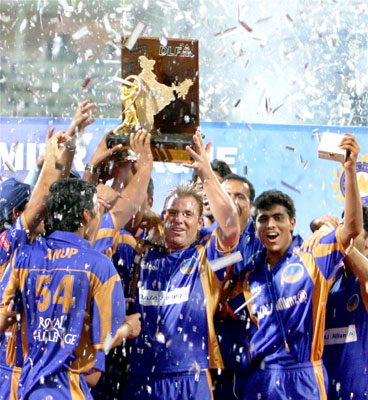 The Indian Premier League's next three seasons, starting 2011, will have a total of 74 matches, up from 60 this year, following the addition of two new franchises -- Sahara Pune Warriors and Kochi.

There would be 70 league matches plus four play-off matches with each team playing the same number of matches (14 of which 7 would be home and the other 7 away) as in the previous IPL editions, said BCCI secretary N Srinivasan in a release after the IPL's Governing Council meeting in Mumbai.

"There will be one league table with teams divided into 2 groups of 5 teams each," the BCCI secretary said.

The IPL GC also decided to allow the original eight franchises to retain a maximum of four players, including three Indians, and fixed a salary cap of US$ 9 million for each franchise to spend at the next players' auction set for the middle of November.

The player contracts will be for a period of two years plus a one-year right of extension by franchise.

The retention of players would result in reduced amount available with each franchise with amounts of US$ 1.8 million per annum for the first player so retained, $1.3m, 0.9m and 0.5m for the other three players reduced from its kitty.

This is irrespective of the actual player fee paid to each of these players, Srinivasan said.

If a franchise retains four players, its salary cap will be charged by $4.5 million in each of 2011 and 2012 and it will have only $4.5m remaining to pay as player fees for the remainder of its registered squad.

The IPL has added a rider to player retention saying the franchise and player must mutually agree to it as well as the player fee to be paid for 2011 and 2012 seasons.

Each squad would consist of not more than 30 players, and only capped players plus any IPL player who has played more than 75 per cent of matches for his team in the 2010 season will feature in the auction.

The Pune and Kochi franchises who did not participate in the 2010 season can sign upto four players from the list of players who were not a part of the squad of any of the teams in the past three IPL editions.

"A new player registration and contract management process will be detailed soon. No player contracts can be signed until then," Srinivasan said, adding the player regulations would be circulated soon to all the franchises.

"From a sporting perspective, this ensures all franchises will have the same number of matches at home as in the previous editions. The timelines for this will be finalised soon," Srinivasan said in his release.

A revised structure for play off matches would be followed for future seasons and the format would reward consistency of performance in the league stages, the Board secretary said.

The new play-off format will do away with the semi-finals and the 3-4th places tie but still retain the same number of four knockout ties.

The new knockout format is:

Play-off game C : winner of game B vs loser of game A

Following the addition of Pune and Kochi franchises, the catchments areas were also revised as below to be aligned according to the cricket associations instead of states as follows: